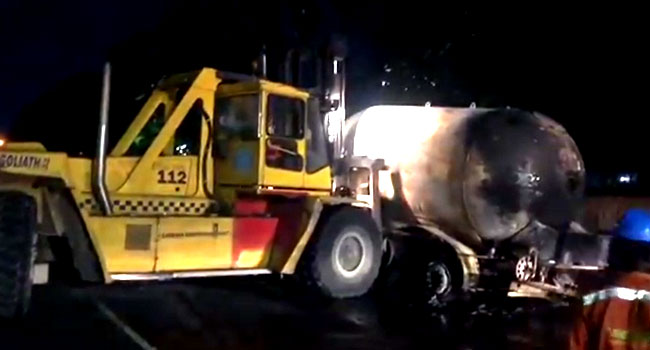 No fewer than three persons have been confirmed killed in a gas tanker explosion in the Ikeja area of Lagos State.

Mr Ibrahim Farinloye, a spokesperson for the National Emergency Management Agency (NEMA), disclosed this in a telephone interview with Channels Television on Friday.

“The latest is that we just recovered three dead bodies this morning, which was beyond our expectation,” said Farinloye while giving an update on the incident on Sunrise Daily.

“Unfortunately, when we got there this morning, we saw three dead – one Mr Balogun who was the manager of the Chinese restaurant. He was recovered with two other personnel of the restaurant.”

The NEMA spokesman noted that the victims seemed to have made an attempt to escape from the building when the incident occurred.

He explained that this possibly led to their death, while the boy said to be missing since Thursday night had yet to be found.

The explosion, said to have been caused by a leakage while the LPG tanker was in motion, threw the environment into panic as a result of the huge fire that ensued.

This also left some people wounded with four of them taken to the Trauma and Burns Centre at the General Hospital, Gbagada.

Farinloye noted that the Commissioner of Police, Hakeem Odumosu, led a team of policemen to the scene on Friday in a bid to restore normalcy in the area.