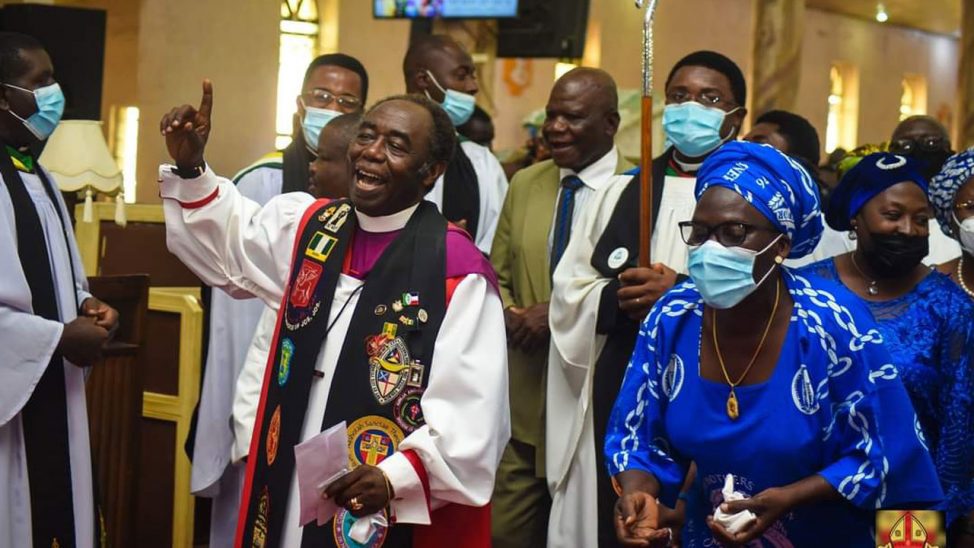 Archbishop Kwashi and wife, Dr. (Mrs.) Gloria Kwashi dancing at the thanksgiving service
Share
Facebook Twitter LinkedIn Pinterest Email WhatsApp
A special Thanksgiving Service was held for the Diocesan Bishop of Jos (Anglican Communion), Most Rev. (Dr.) Benjamin Kwashi, at the Cathedral Church of St. Luke, Jos on June 26, 2021.
The service was to thank God for the healing He wrought in the life of Archbishop Kwashi, who took ill and was flown to US for medical treatment with his wife, Dr. (Mrs) Gloria Kwashi, after he was diagnosed of colon cancer. For over eight months the Anglican Diocese of Jos missed his presence but they were assiduously praying for his quick recovery, and suddenly, he appeared on June 24, 2021 while the Clergy and Wives’ Retreat of the Diocese was ongoing. Uproarious jubilation filled the air, as he resumed duty.

According to a report from the Diocese, Archbishop Kwashi “came in straight from the Airport into his Cathedral where he also recommitted himself by renewing the oath of his office. The atmosphere was laden with all sorts of emotion.”

A priest of the diocese and Founder/Leader of El-Rehoboth Global Leadership Foundation, the Rev. Canon Timothy Olonade, who witnessed the sudden reappearance of Archbishop Kwashi recounted the joyous occasion.

In his words: “This afternoon, a miracle walked into the Cathedral Church of St Luke, Jos, live! Dressed in official ecclesiastical attire, he walked in and knelt before the altar! He subsequently sang, praised and prayed with us. Offered absolution, renewed his oath and finally prayed benediction to close the solemn re-commissioning service. Afterwards, he hugged, smiled and took photograph with us. Thereafter, he drove home to dance with Kauna ecstatic children. Yes! Archbishop Kwashi came back to Jos today, June 24, a victor. He returned from the valley of the shadow of death, alive. Stage four cancer completely conquered…”

Recalling that Archbishop Kwashi’s visit to US and eventual treatment was divine, his friend, Bishop Quigg Lawrence of the Diocese of Christ our Hope, United States, said: “They arrived here in October expecting to have his cancerous colon tumour removed and then heal up for a few weeks and fly home to Nigeria. During surgery, Dr. Madge Ellis found the cancer had spread to Ben’s liver and he was, shockingly, Stage four. Ben definitely would have died had the Holy Spirit not rather miraculously told us to invite him to come here for treatment. Seven months and 12 brutal rounds of chemo later, Ben is healthy.”

Testifying of God’s divine intervention and miraculous healing, Archbishop Kwashi said what was expected to be a three-hour surgery became about eight months treatment because the cancer had extended to his liver.

He said: “Indeed, I left Nigeria for treatment of colon cancer, and the doctors had told my wife, Gloria when they were taking me in that it won’t take more than three hours and I will be out. But three hours, I was not out. Three hours, 15 minutes, they called Gloria to say, when they opened me up, it was more than colon cancer; my liver was also gone. So, at the end of the day, I spent six hours on the theatre bed. In God’s grace, the liver surgeon was around, they found him. So, after six hours, I was taken out to the ward, and that is a huge testimony, a huge miracle, because once cancer reaches your liver, it’s also going to affect your entire blood system because the liver supplies blood to the whole blood. So, cancer was all over me. That was why I spent nearly eight months of treatment until I was declared cancer-free. Praise the Lord!”