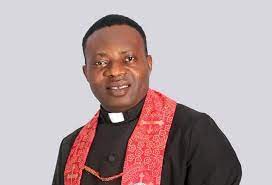 A priest of the Diocese on the Niger, Anglican Communion in Anambra State, Reverend Canon LumenCristi Eboh has resigned his priesthood, alleging intimidation and conspiracy, among others by church leadership.

In a statement issued, yesterday, Eboh, who owns the God in Action Adoration Ministry, alleged that the bishop wanted to acquire his personal land where his ministry is located, adding that his involvement in charismatic activities contributed to his disagreement with the Prelate.

He also cited harassment, high handedness, intimidation and conspiratorial manipulations by his Diocesan, Bishop Owen Nwokolo as reasons for his resignation.

Eboh, a radio and televangelist, also alleged that Nwokolo wanted his ministry’s registered trustees to be altered to include him (Nwokolo) and wife, but argued that God did not reveal to him that the Bishop or his wife were vessels in the ministry and therefore, rejected his request.

“My refusal to include the Bishop as trustee and to hand over landed property of the Adoration Ministry brought about the conflict between the Bishop and I,” he said.

However, in his reaction, Nwokolo, who spoke through the Legal Officer of the Diocese, identified as Humphrey, denied the allegations levelled against him by the cleric, describing them, as false and baseless.

Bishop Nwokolo said the Priest violated church principles amid support from the Bishop, saying: “Eboh refused to abide by the code of conduct of the church and has been disobedient to his superiors. He added that the priest was sent on indefinite suspension on 20th December, 2021 due to his numerous acts contrary to the Scripture and traditions of the Church in accordance to Canon XVI (38) of Church of Nigeria (Anglican Communion).

“The crux of the matter is that Eboh wanted to run the affairs of his ministry independent of the Diocese.”