The Iraqi Ministry of Culture has honoured the Chaplain of St George’s Church, Baghdad, the Revd Faiz Jerjes, as one of the country’s Distinguished Personalities of the Year for his role in supporting human rights work in the country. Father Jerjes, whose surname is sometimes transliterated Jerjees, has been involved with St George’s since 2006. After ordination, he served as curate at the Church, before being licensed as Priest in Charge in January 2015 by the Bishop of Cyprus and the Gulf, Michael Lewis.

In October, St George’s staged a Festival of Faith, “in the midst of hardship and at a time of disturbing political developments”, the Diocese said, to provide an opportunity for many Christians in Iraq to “joyously reaffirm their faith in God the Holy Trinity, who is Lord of all.

In 2015, the Church supported some of the internally displaced Iraqis who had fled from what was then the rapidly-advancing Daesh in the Mosul and Nineveh Plain area of Iraq, and who by then were congregating at and around St George’s. With the support of the Church of the Epiphany in Doha, Qatar, St George’s provided household goods and provisions to around 60 families. 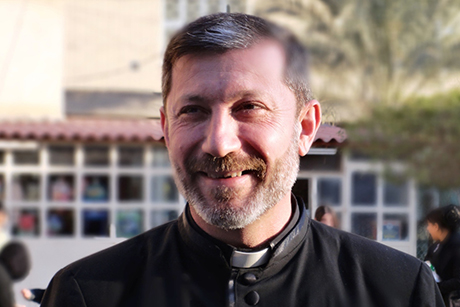 The Revd Faiz Jerjes.
Photo: Foundation for Relief and Reconciliation in the Middle East

St George’s Church in Baghdad was founded in 1864 and remains the only Anglican church in Iraq. The Foundation for Relief and Reconciliation in the Middle East, which supports the church, says that the present building was constructed in 1936 as a memorial to the soldiers of the British Empire who lost their lives in Mesopotamia during the First World War.

Originally built as a church for expatriates, its present congregation is entirely Iraqi. The Church was closed in 1991 after the first Gulf War. By the time it re-opened, in 1998, the building had been totally looted and was restored with funding from the British Embassy in Baghdad and the Diocese of Cyprus and the Gulf.