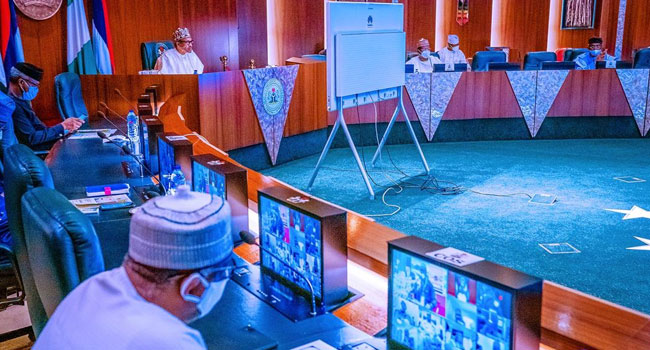 President Muhammadu Buhari is again meeting with members of the  Nigeria Governors Forum Security Council and Service Chiefs at the Presidential Villa in Abuja.

The meeting which is taking place at the Council Chambers has in attendance, Vice President Yemi Osinbajo, Secretary to the Government of the Federation (SGF) Boss Mustapha, the National Security Adviser (NSA) Major General Babagana Monguno (retd), the Chief of Staff to the President Prof Ibrahim Gambari and Heads of other security agencies.

The meeting comes barely 24 hours after President Buhari on Monday met with Governors from the six North-East states, all Service Chiefs, and the Inspector-General of Police Mohammed Adamu behind closed doors.

During the meeting, President Muhammadu Buhari urged the Nigerian army to do better in the war against insurgency in the North-East.

According to the President, his administration ran on three key principles: security, the economy, and fighting corruption.

He said security is the ultimate job of government and that based on the level of insecurity his government inherited, the people of the North-East will appreciate what his government has done so far.

President Buhari also congratulated Borno State Governor, Babagana Zulum, on his emergence as Chairman of the North-East Governors Forum, noting that the security challenges facing Borno are always on his mind.

He said the government must address the remote causes of insurgency in the North-East, which include widespread poverty, illiteracy, and access to farmlands.

According to him, this is why Boko Haram has been successful in recruiting more members into its fold.

Governor Zulum declined to repeat his allegations of sabotage in the military when asked about the recent attack on his convoy.

He said the military is doing all it can to combat the insurgents, stressing that they need more equipment to be successful in this endeavour.