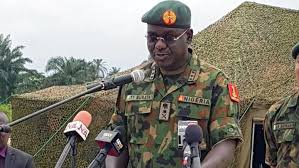 Nigeria’s Chief of Army Staff, Tukur Buratai, has said over 1,000 Boko Haram insurgents have been killed in the last six weeks.

He disclosed this during a luncheon organised by Operation Lafiya Dole on Sunday.

Buratai stated that about 84 high ranking Boko Haram logistics and informants were apprehended within the period.

“We have successfully displaced major camps of the BHTs. We have killed 1,015 terrorists and ISWAP in the ongoing operation in Borno, Yobe and Adamawa state respectively.

“We have also arrested 84 BHTs logistics and information suppliers in the ongoing operation which started 12 April 2020,” he said.

Buratai also appreciated the cooperation of the Nigeria Air Force, Nigerian Navy and Police for their support in the battle against insurgency.