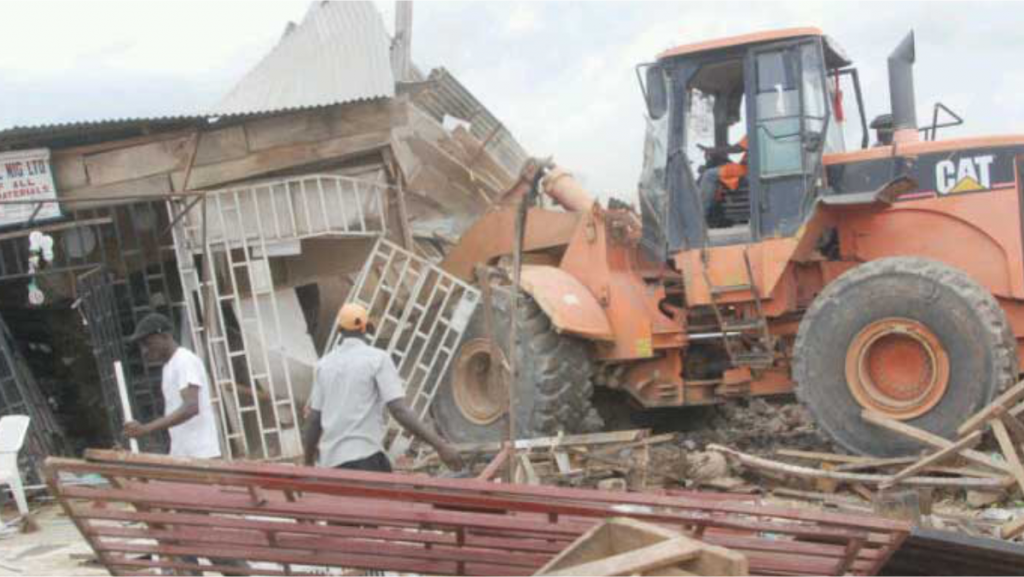 The Federal Capital Territory Administration (FCTA) on Wednesday in Abuja demolished markets and a tipper garage in Gwarinpa Estate.

The chairman of the FCT Ministerial Task Force on City Sanitation, Ikharo Attah, who led the operations, said the demolition would be sustained for days to prevent Gwarimpa from becoming a slum.

He explained that criminals had turned the markets and garage into hideouts.

Mr Attah added that the daily perennial gridlock in parts of Gwarinpa was also attributed to the “illegalities flowing from the activities of the illegal tipper garage.”

He further stated that sanitation of the areas was even more important to correct contravention of the Abuja Environmental Protection Board (AEPB) and FCT Urban and Regional Planning laws by residents.

”We are removing illegal shanties markets and tipper garage. The most painful thing is that the transit corridors have been taken over by shanties and squalors,” said Mr Attah. “It has become a serious contravention against the Abuja Environmental Protection Board Act and the Urban and Regional Planning laws. We gave them notices and warnings since January, and for the past one week, we have been coming here to warn them to move out.”

But the FCTA official said the occupants did not heed the warning.

“They refused to move,” he stated. “We have also warned them to stop contributing money to bribe people.”

The assistant director of Monitoring and Enforcement at the AEPB, Bello Kaka, explained that measures had been put in place to secure the reclaimed area to prevent the displaced occupiers from returning.

He also debunked allegations that agents of AEPB were collecting money as a bribe to allow people to occupy the areas illegally.

Mr Kaka warned people against dealing with unscrupulous agents claiming to be AEPB staff out to defraud.