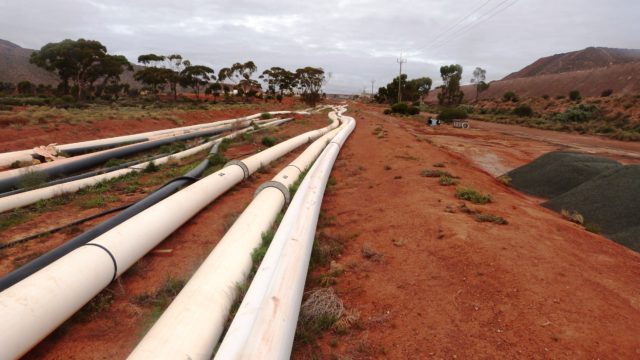 The 614-kilometre Ajaokuta-Kaduna-Kano (AKK) Gas Pipeline project flagged off last week, by President Muhammadu Buhari, 12 years after its conception may remain a game-changer on paper unless glaring challenges are urgently addressed.

Already, experts are calling for cautious optimism over the $2.8b project, stressing that insecurity, economic viability, timing, global oil and gas market realities, the structure of Chinese loans, political factors, among others could undermine maximum benefits from the project.

Expected to be completed within 24 months, the pipeline project, which has the capacity to transport 2.2 billion cubic feet of gas per day, would be constructed by two groups – Brentex/China Petroleum Pipeline Bureau (CPPB) Consortia, and Oilserve/China First Highway Engineering Company (CFHEC) Consortia. It is the first phase of the 1, 300km-long Trans-Nigeria Gas Pipeline (TNGP).

The pipeline, which starts from Ajaokuta, in Kogi State running through Abuja, Niger, Kaduna, and ending in Kano State, would be fed from existing domestic infrastructure.

According to Buhari and others, including the Minister of State for Petroleum, Timipre Sylva, and the Group Managing Director of Nigerian National Petroleum Corporation (NNPC), Mele Kyari, benefits of the projects include generation of nearly 4, 000 megawatt of power; over three million jobs; rapid development of domestic utilisation of gas; rejuvenation of moribund textile, production of fertiliser, and drastic improvement in the petrochemical industry.

The stakeholders also disclosed that the project would add two power plants in Kano and Abuja to boost the country’s power supply, as it is expected to also provide Compressed Natural Gas (CNG), which would serve as an alternative to Premium Motor Spirit (PMS), thereby saving foreign exchange spent on the importation of petrol.

The project, an aspect of the Nigerian Gas Master Plan, if executed according to plan, would link the Southern part of the country to other parts to fast track the utilisation of the nation’s natural gas resources, which according to the Department of Petroleum Resources (DPR) stands at 203.16 trillion cubic feet (TCF).

While most industry players, who spoke to The Guardian, yesterday, lauded the initiative, they were equally cynical about the country getting the best from the project, knowing fully well that similar facilities across the country have remained dormant, either due to failing refineries, as well as repeated attacks on pipelines, or the political colouration of developmental projects.

An energy expert and the Deputy Vice-Chancellor of Afe Babalola University, Damilola Olawuyi, stressed the need to bridge the infrastructure deficit in the country with long-term infrastructure development, noting that the pipeline would address perennially challenges of electricity generation and distribution capacity.

Happening during Covid-19 when many countries are rolling out economic recovery plans to address fiscal and economic hardships resulting from the pandemic, Olawuyi sees the project as a buffer to unemployment, training and business opportunities for local communities, adding that upon completion and transfer, the pipeline is expected to generate additional government revenue, both from the use of the pipeline and from the increased ability to export natural gas to other African markets.

Olawuyi, who is also a professor of law said: “More important, the public-private partnership (PPP) build and transfer model of the project is very reassuring as it, to a large extent, allays fears about availability of continued and sustained financing to complete the project, given that all the financial requirements are expected to be met by the contractor,” Olawuyi noted.

He, however, warned that there was a need for governments at all levels to cooperatively monitor and address socio-political challenges that tend to frustrate monumental projects of this nature.

To him, challenges, especially vandalism of pipeline network and sabotage, which have long hindered optimal production and distribution processes cast a shadow on getting desired objectives from the AKK. He stressed the imperative of mapping out watertight security measures to protect the pipeline during and after construction.

“Infrastructure projects worldwide now have to be designed to address emerging threats of natural and hybrid disasters, such as climate change and explosions. International law has increasingly recognised the need for climate-smart infrastructure, i.e. pipelines, structures and systems that reduce greenhouse (GHG) gas emissions and improve resilience to the risks posed by climate change.

“Generally, a strategic long-term plan has to be carefully worked out, with the active consultation and contribution of key stakeholders across public, community, industry and academic spheres, to address issues of long-term maintenance, security, community benefits, environmental integrity and operational management of this project so that it can realise its projected short and long-term goals,” he said.

For a Professor of Petroleum Economics and Policy Research, Wumi Iledare, a project like AKK holds immense benefits if it were in a normal society, where national interest, patriotic outlook, and unity of purpose are obtainable.

But in a country like Nigeria, Iledare stated that a lot would be required to get maximum benefits from it, especially public education on how to manage the optics of the project.

According to him, a perception that it is a sentimental project for the North may be misleading, adding that sentimental pronouncements must be carefully avoided in the analysis of its impact.

Iledare also expressed worry that the country also has some pipeline projects that should have been completed before the AKK to minimise gas supply constraints for such a massive scale, predicted that the project may suffer a similar fate to the gas turbines project without the gas infrastructure that happened during President Olusegun Obasanjo’s tenure.

He added that exploration and production investments to search for non-associated gas, lack of existing off-takers along the value chain, from Ajaokuta to Kano could flaw the pact, and may be responsible for reasons the government had to guarantee the loan.

While maintaining that the idea that customers would emerge after the construction of the pipeline may be irrational with stochastic outcomes, Iledare added that “it is less likely than not, that the project would be deliverable in 24 months. That is too ambitious within the context of the cultural setting, disdain for the rule of law and primitive economic structure. Nonetheless, AKK is a worthy project looking at the big picture and natural gas abundance in Nigeria.

“I will encourage the government to, henceforth think of using economic indicators in project ranking, whenever it has non-mutuality exclusive projects that are doable, but for budget constraints,” he stated.

The Chairman of Petroleum Technology Association of Nigeria (PETAN), Bank-Anthony Okoroafor, who said that projects, which promote utilisation of gas must be supported in the country, noted that the AKK pipeline remain commendable and should be supported by Nigerians.

Okoroafor said: “It is a good project. We should support projects that improve utilisation of our gas as enablers for economic transformation and engines of development and industrialisation.”

On her part, the Director, Centre for Democracy and Development (CDD), Idayat Hassan, is worried over the cost of the project, especially as the country is currently heavily indebted.

“Privatisation is the way to go, instead of collecting loans. How do we repay the loans with the unstable price of oil? Yes oil will never be obsolete, but the country must learn from previous mistakes and proactively engage investments in the context of realities,” she stated.