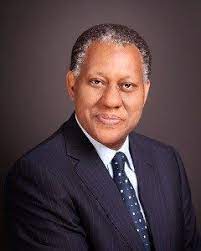 I have been a long time admirer of David W. Virtue DD, – pastor, columnist, journalist and writer on religious issues for several decades for numerous periodicals, including the popular “Christianity Today”. That respect and esteem is acknowledged by several million Christian readers around the world, perhaps more especially since he founded his now famous VirtueOnLine (VOL) almost thirty years ago.

Dr Virtue has the immense gift of being able to mobilize the English language to great effect and if need be to “send it into battle” against both real and perceived opponents. His incisive tweets are legendary.

It is however most disheartening that in recent times, the Church of Nigeria (Anglican Communion) and it’s Primate the Most Reverend Henry C. Ndukuba DD have been caught in the sights of his influential VOL organisation, as perceived opponents to be vilified.

The attacks in Dr Virtue’s usually incandescent prose have therefore become scathing and unrelenting. Otherwise, two disparaging articles in such quick succession, within two months of each other, against a leading African church! It cannot be disputed that the Church of Nigeria (Anglican Communion) – which happens to host the largest congregation of Anglicans in the world, responded to a call to establish missions in North America, in alignment with the mandate of Christ for His Church.

Thus the recent attacks against CoN and its Primate whose photograph has been generously displayed in both articles, can only be explained as a calculated, methodical but failing attempt to demonize another perceived opponent.

In Virtue’s latest article entitled “Nigeria remains silent in the face of mob attack on Anglican parish”, he eloquently but I daresay disingenuously describes the noisy and disruptive protest of angry and disgruntled parishioners in a local church in Irvington, New Jersey as a “riot” by a “mob”, in order to conjure up images of untold violence in the minds of his teeming readers. Conveniently he ignores the swirling allegations of financial impropriety and a lack of accountability amongst the church’s leadership, by the protesters, and the fact of an attempt at locking these dissenting church members out of their church.

This crystallized my suspicion that this offensive is neither from forthright investigation or observation, nor based upon honest but mistaken information, but is a deliberate a priori design to fulfill a less discreet purpose – the arrest of an alleged expansionist aspiration by CoN under its current Primate, which VOL imperiously condemns.

David Virtue’s earlier piece which was accordingly entitled “Is the Church of Nigeria trying to become their own international church movement”, spuriously alleged that the Primate of the Church of Nigeria (Anglican Communion) (CoN), Archbishop Henry Ndukuba DD is attempting to make the CoN its own global Church movement, that is not just separate from Canterbury, but disconnected from her GAFCON partners!”

This then is CoNs alleged “crime” for which VOL has determined that a Miranda caution is perhaps the required next step, before a full assault!

It is no surprise therefore that his latest article, that is focused on CoNs seeming reticence over the crisis in the Irvington parish, dramatically begins with the famous Miranda warning, required to be read to persons accused of crime, before their arrest and trial,
“You have the right to remain silent…”

Virtue then peremptorily concludes, “We can only assume that the Church of Nigeria has chosen to be silent because now, more than 10 days past the horrible events at Christ Church in New Jersey, we have heard nothing — absolutely nothing — from any official with the Church of Nigeria and concludes : “I believe everyone expected the Primate of Nigeria, Abp Ndukuba, to at least make some sort of statement”

Even unfulfilled expectations however do not justify accusatory diatribes or excuse unfounded allegations on account of an unanticipated silence. Silence does not always signify consent. But that’s Virtue’s apparent cause for reading to CoN it’s Miranda rights!

The CoN has indeed deliberately been publicly silent while working strenuously behind the scenes over the past two weeks since the fracas in the Irvington church, to diffuse tensions – reaching out to its ACNA counterparts, in continuing efforts to carefully mediate a crisis arising within a bitterly divided congregation in a single parish in Irvington New Jersey, USA.

Dr Virtue’s article however went without pause, from a Miranda caution to judgment, skipping the essential and mandatory intervening steps of investigation and enquiry and most importantly, hearing the other side, before determining guilt or innocence in anything one is accused of.

This is also scriptural as Dr Virtue undoubtedly knows: “The one who states his case first seems right, until the other comes and examines him”. Proverbs 18:17.

While words like “riot”, “mob”, and “terrorism”, instantly grab our collective attention and imagination, and that property rights, territorial protectionist or expansionist fears are perhaps unsurprising and even pardonable, what should concern Christian leadership ought to be concentration in efforts to ensure that the Gospel is taken “into all the world” Mark 16:15

The challenges of the Church, whether ACNA or CoN, are such that often require us to be reticent, and not rush to damaging negative conclusions, but to give the benefit of doubt in mutual respect and Christian grace and love. Charity, peace, service to God and to community.

I therefore remain optimistic that Dr David Virtue, will find even greater virtue in joining CoN and ACNA, to discreetly look into the underlying causes of the bitter crisis in Irvington, towards a peaceful and satisfactory resolution.

Finally, Virtue’s realization that CoN under its Primate Abp Henry C. Ndukuba, does not in fact have the expansionist tendencies that Dr Virtue so eloquently described, should enable him direct his profound verbal skills to help diffuse the tension, rather than cause further division and thus fuel an entirely preventable conflict between CoN and ACNA.