With a Friend Like Wike, Obaseki Meets His PDP’s Waterloo; Almost 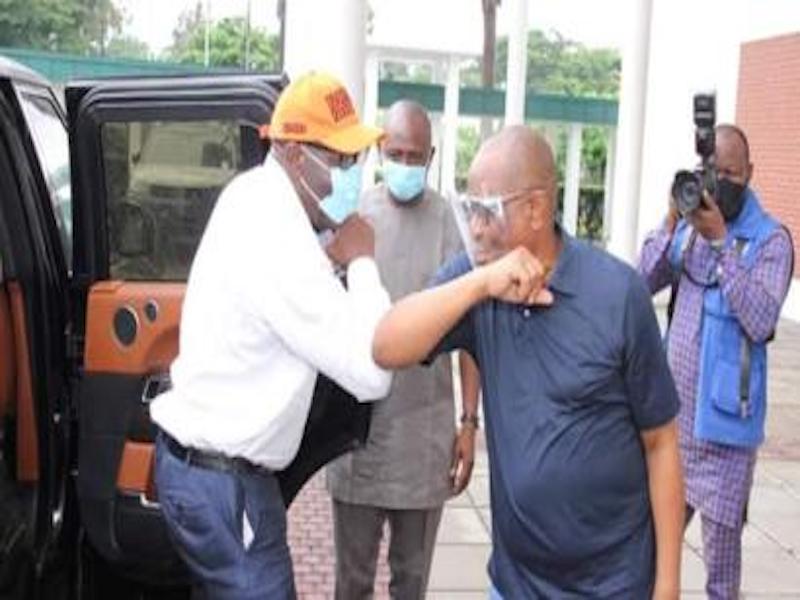 Perhaps, Edo State Governor, Mr. Godwin Obaseki, may have to go back to Nigeria’s school of governance to learn the practical rudiments of Nigerian Politics 101 – which teaches you that ‘the political enemy of your friend, is not necessarily your friend’.

Yesterday, a court sitting in Port Harcourt granted an injunction stopping the governor from participating in the opposition Peoples Democratic Party’s (PDP) primaries, slated for Thursday, to pick its governorship candidate.

It was another Port Harcourt-based court that granted the order stopping the political foes of Rivers State Governor, Mr. Nyesom Wike, led by his predecessor, the Hon. Rotimi Amaechi, from laying claims to the acting national chairmanship of the All Progressives Congress (APC) – a move that assisted Adams Oshiomhole, the embattled National Chairman of the ruling APC, and frustrated Amaechi in his bid to take control of the national structure of the party, ahead of the 2023 presidential election, which he is said to be interested in.

Amaechi’s protege, Chief Victor Giadom, was stopped by the Port Harcourt court from parading himself as the APC’s acting national chairman, in an extension of the supremacy battle between Wike and Amaechi, that has now spilled over to Edo State where Obaseki was counting on the same Wike – a sworn political foe of his key supporter, Amaechi, – to assist him secure the PDP ticket.

And then, there is the suspicion by the PDP apparatchik that Obaseki’s deal with APC governors is to return to the party after he wins the Edo governorship election on PDP’s platform.

As the intrigues continue, the Port Harcourt court, ruling on a suit filed by the leading PDP governorship aspirant in Edo State, Omoregie Ogbeide-Ihama -an ally of Wike -restrained Obaseki from participating in the PDP’s primary pending the determination of the suit.
The ruling of the Federal High Court, sitting in Port Harcourt, came the same day another aspirant, Mr. Gideon Ikhine, stepped down for Obaseki.
Obaseki, who just defected to the party from the APC, was screened last week by the PDP Screening Committee.

He had earlier been granted waiver by the party after his defection from the APC.
The suit has the National Chairman of the PDP, Prince Uche Secondus, as the first defendant.
Other defendants are Emmanuel Ogidi, Kingsley Chinda, Debekeme, James Manager, Ajibola Muraina, the PDP, Obaseki and the Independent National Electoral Commission (INEC) as second to ninth defendants respectively.

Ogbeide-Ihama, through his lawyers, Mr. Donald Denwigwe (SAN) and Chief F. Orbih, SAN, and leader of PDP in Edo State, had asked the court to stop Obaseki because his defection to the party, a few days to the primary, was unreasonable and aimed at destabilising other aspirants.

The court, presided over by Justice E. A. Obile, after listening to the submission of Denwigwe and Orbih, ordered the defendants not to allow Obaseki or any member or non-member of the party other than those that have purchased forms and were screened within the time stated in the timetable to contest for Thursday’s primary.

The judge also ordered that order and other processes be served on Secondus, Ogidi and Chinda by substituted means at their residences in Port Harcourt.
The order and other processes are also to be served on the PDP at its national headquarters in Abuja and Obaseki at the Government House in Benin-City.
The court adjourned till tomorrow ( Wednesday) on the eve of the primary election to hear the motion on notice.

PDP Aspirant Steps down for Obaseki

Earlier, the aspiration of Obaseki to emerge as the governorship candidate of the PDP in Edo State had received a boost as one of the three aspirants in the race stepped down for him.

Also, in an apparent need to accommodate the Deputy Governor of Ondo State, Mr. Ajayi Agboola, who defected to the PDP on Sunday, the main opposition party has extended the sale of nomination forms for the Ondo State governorship election.
However, to ensure a rancour-free primary in Edo State,
PDP leaders have mounted pressure on another aspirant, Mr. Kenneth Imasuagbon, to step down for the governor.

Ikhine, who declared support for the governor at his campaign office in Benin City yesterday, noted that his decision was to allow the governor consolidate on his developmental strides in the state.
According to him, “Governor Godwin Obaseki is a prayer-answered for the PDP. We might have a common vision but the means of achieving them may be at variance but God has brought them to reality.”

Urging his supporters to support the re-election of the governor, Ikhine said: “We want to ask for your support and to ensure that everyone that has worked with us across the state redoubles their efforts in ensuring that the margin of victory between the PDP and the opposition is wide.”
Obaseki reassured the PDP that his administration will continue to prioritise the welfare and wellbeing of all Edo people.

He said: “PDP is Edo and Edo is PDP. Together, we shall bring Edo to where God has destined it to be.
“Governance has to be about the people, not about a few individuals. It has to be about translating the norm and the new value where we say white is white and black is black. We have to rebuild our great party; if PDP were not in the state, l may not have switched to PDP.

“Today is the beginning of a new dawn in our party. What we are doing is a merger. What one person was doing before, two persons will now be doing the same thing. The victory will be for us all.

It was, however, learnt that barring any further changes, one of the two remaining aspirants or both of them might eventually step down for Obaseki to emerge the consensus governorship candidate for the PDP in the September 19 election.

According to a source who was privy to the series of negotiations with the aspirants, Imasuagbon may also step down today following pressure from party elders.
THISDAY gathered that Imasuagbon had a long meeting with the PDP leaders, who prevailed on him to step down in the general interest of the party.

However, the third but leading aspirant, Ogbeide-Ihama, who hails from the same senatorial zone as Obaseki, has refused to step down for the governor.

But a source said party leaders led by PDP Governors including Ifeanyi Okowa of Delta State and Aminu Tambuwal of Sokoto State and Chair of PDP Governors Forum , had intensified efforts to persuade him to do so in the overall interest of the party.

The source told THISDAY that the sentiment being canvassed is that Edo State is a PDP State and that the aspirants should not be seen
as obstacle against the party regaining power in the September 19 governorship election.
According to the source, Imasuagbon will within the next 24 hours make the consultation with his supporters and other stakeholders in his campaign and reach a decision thereafter.

The source explained that since Obaseki would be completing his eight years in office by 2024, it would be expedient for the governorship slot to be zoned exclusively to Edo Central.

According to a statement signed by the National Publicity Secretary of the party, Kola Ologbondiyan, other timeframes related to the nomination processes for the Ondo State governorship election remain as earlier announced.

PDP said all leaders, governorship aspirants, critical stakeholders and members of the party in Ondo State should be guided accordingly.

The number of those eyeing the party’s ticket grew yesterday as a former Commissioner in Ondo State, Mr. Olusola Ebiseni, threw his hat into the ring.
He promised to make use of the opportunity of the natural resources in the state to transform it, if elected.