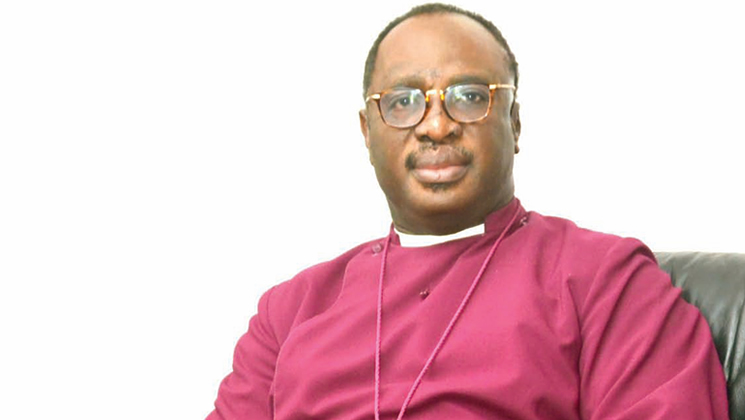 The Archbishop of Lagos Province, Anglican Communion and Bishop of Lagos Diocese, Most Reverend Humphrey Olumakaiye,  died in the evening of Sunday, October 30 at the age of 53.

Here are some few things to know about Archbishop Olumakaiye:
1. Until his death, he was the Bishop of Lagos, and Archbishop of the Ecclesiastical Province of Lagos (Anglican Communion), Church of Nigeria, having been Bishop of Osun North-East Diocese since 2009 until 2018 when he was translated to the See of Lagos.

2. He was presented as the Archbishop of Lagos Ecclesiastical Province on November 7, 2021 at the Cathedral Church of Advent, Life Camp, Abuja, the Federal Capital Territory.

4. The late Archbishop was a native of Idanre, a town in Ondo State.
5. He started his Education at St. Michael’s primary school, Esie in 1975 and proceeded to Government Secondary School, Omu-Aran, Kwara State in 1982. 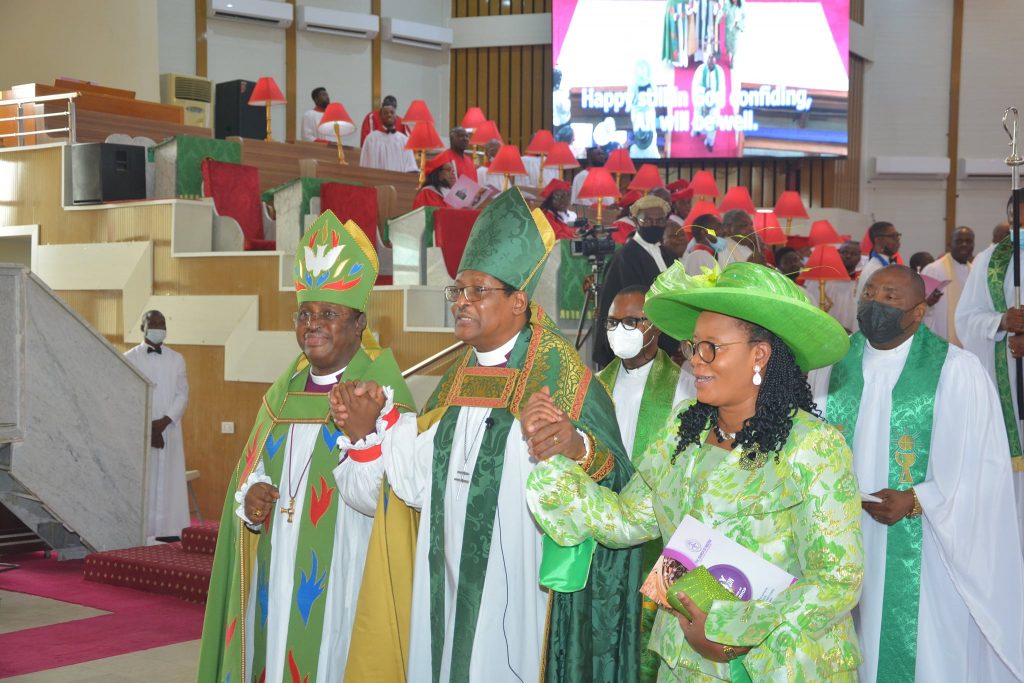 6. In 1983, he left Omu-Aran to conclude his Secondary education at Cherubim Seraphim Secondary School, Ilorin in 1986.
7. He bagged his first degree in Religious Studies from the University of Ibadan between 1991 and 1993, and a Master’s Degree in Religious Studies in 2001. He went further to obtain a doctorate degree in Church History and Doctrine from the same university.
8. He became a deacon in June 1993 and was ordained a priest in December same year by E.A. Ademowo, Bishop of Ilesha Diocese. This was after Olumakaiye’s training and graduation from Immanuel College of Theology, Ibadan.
9. He started his ministry at Christ the Saviour Anglican Church, Cappa, Ilesa, Osun State in June 1993.
10. At the age of 40, Olumakaiye was elected Bishop on May 22, 2009; he was consecrated Bishop on Sunday, July 12, 2009 in Yenagoa, Bayelsa state while he was enthroned on Thursday, July 16, 2009 at Cathedral church of St. Philip’s, Otan Ayegbaju as the first Bishop of Anglican Diocese of Osun North-East. 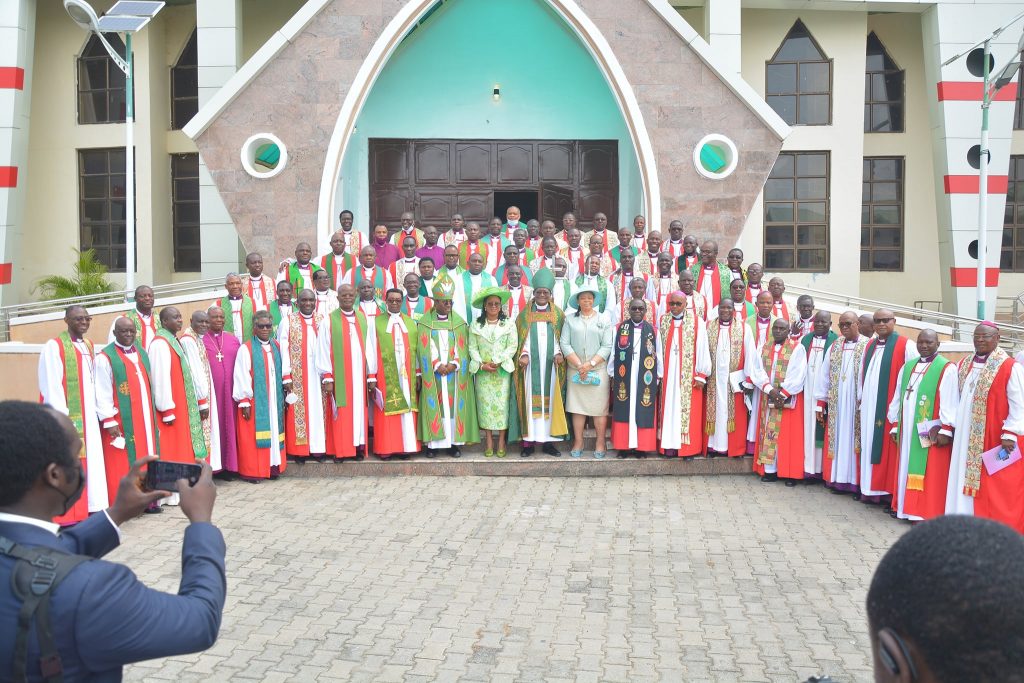 11.Olumakaiye was elected for translation into See of Lagos on Tuesday, February 6, 2018 and enthroned as the 8th Bishop of Lagos on Monday, July 30, 2018 at the Cathedral Church of Christ, Marina, Lagos.

13.Olumakaiye has served as the Coordinator, prayer convocation for Ibadan province: the secretary of supra west, church of Nigeria (comprising of 63 Dioceses): the secretary of the proprietors’ desk of Ajayi Crowther University, Oyo. He was member of pension and gratuity board, supra west church of Nigeria and a member of governing council, Ajayi Crowther University, Oyo.

14.Until his death, Olumakaiye was married to Motunrayo Funke, who is a professor and former head of the department of nutrition and consumer sciences, faculty of agriculture Obafemi Awolowo University, Ile -Ife, in Osun State. They had a son, Richard Tunbamise.

Akinyelure Sympathizes With Olumakaiye Family Over Loss Of Illustrious Son

In a condolence message sent to the bereaved family through his SA (Media & Strategy), Charles Akinwon, the Senator described the late Bishop of Lagos Diocese and Archbishop of Lagos Province Anglican Communion as a promising man who had reached the pinnacle of his pastoral career at a tender age.

“This news is devastating and I find it too difficult to comprehend. But I charged the entire family of the late Archbishop to take solace in God, the giver and taker of life,” Akinyelure said.

The Senator used the medium to pray for the soul of the deceased and seek the face of God for protection over the immediate family left behind.

“No doubt, Olumakaiye family and indeed the entire Idanre kingdom had loss a rare gem but who are we to query our Creator who knows everything,” the statement added.

On behalf of the State Government, good people of Lagos State, and my adorable wife, I sympathise with the Church of Nigeria (Anglican Communion) on the demise of the Archbishop of the Ecclesiastical Province of Lagos, who was also the Lord Bishop and Missioner of the Diocese of Lagos, Most. Rev. (Dr.) Humphrey Bamisebi Olumakaiye.

The death of Archbishop Humphrey Bamisebi Olumakaiye, who I have known for many years as a fellow Anglican came to me as rude shock. His death is a great loss to the Anglican Communion, especially the Diocese of Lagos. But we must always take solace in God that our Lord Bishop lived a good life and served the humanity passionately.

He impacted people within and outside the shores of Nigeria positively. He was the first Nigerian priest to preach at Melbourne Church, London. As an evangelist, preacher, and administrator, he served God with all his heart, using his spiritual gift to win souls for God. He was an apostle of God and remained committed to God till his death on Monday.

The pastoral and wise counsel of Archbishop Olumakaiye will be sorely missed by his family, the House of Bishop, clergies, and the laity.

I sympathise with his family, particularly Mama Lagos Diocese, Prof. Motunrayo Olumakaiye, and the entire Anglican Communion members. I pray that God will grant the late Archbishop Olumakaiye eternal rest and grant the family and the church the fortitude to bear the irreparable loss.

Ondo State Governor, Arakunrin Oluwarotimi Akeredolu, SAN, CON has described the death of the Archbishop of Lagos Province, Anglican Communion and Bishop of Lagos Diocese, Most Reverend Humphrey Olumakaiye, as a devastating loss.

Governor Akeredolu said the late Archbishop passed on to glory at a time when his voice and prayers are needed for national development and progress.

According to the Governor, the Church of Nigeria (Anglican Communion) has lost a giant and bridge builder who spent his lifetime to gain souls for Christ.

“As a State, we are proud to have an indigene of Idanre, Ondo State, serve in such great capacity with honour. Most Reverend Olumakaiye was a resourceful, highly cerebral and principled servant of God whose ministry saw him through various steps of the spiritual ladder.

“Beyond this emotional blow, we understand that God has the final say on our lives. He pulls the plug whenever he deems fit. Our God is unquestionable. We would have loved Most Reverend Humphrey Olumakaiye to still be here with us, but God has called him home.

“Indeed, he had played his own part of the endless life orchestra; he is gone to rest. His good works and commitment will continue to speak for him. He lived well.

“He was a trans-generational man of God whose passion for the young ones was inspiring. His uncommon love and understanding for the youth was heartwarming. He will be sorely missed,” the Governor said.

The Governor noted that the late Archbishop contributed immensely to the growth and development of the Church of Nigeria, Anglican
Communion, where he served in many capacities.

Governor Akeredolu commiserates with the Widow, Children and Family of the Archbishop, as well as Diocese of Lagos and the entire Anglican Church. He prays God to grant him eternal rest.

The Vice-Chancellor of Ajayi Crowther University, Professor Timothy Adebayo, has expressed sadness over the demise of Most Reverend Humphrey Olumakaiye, the Archbishop of Lagos Province and Bishop of Lagos Diocese, Church of Nigeria (Anglican Communion).

Professor Adebayo, in a release from his office, noted that the late bishop was a member of the Governing Council of the university, who showed great interest in the development of the institution.

He expressed his condolences to the Olumakaiye family, the Lagos diocese and the entire Anglican Communion, on the loss of Olumakaiye whom he described as young and vibrant preacher, who was already making waves in the province and diocese before his demise.

He noted that Ajayi Crowther University would miss the revered cleric for his benevolence, advice and prayers. He said his condolences were expressed on behalf of the Board of Trustees, Governing Council, Senate, Staff and students of the university.
He also condoled with his immediate past predecessor in the university, Rt. Rev. Professor Dapo Asaju, given that Olumakaiye was the younger brother to Asaju’s wife.