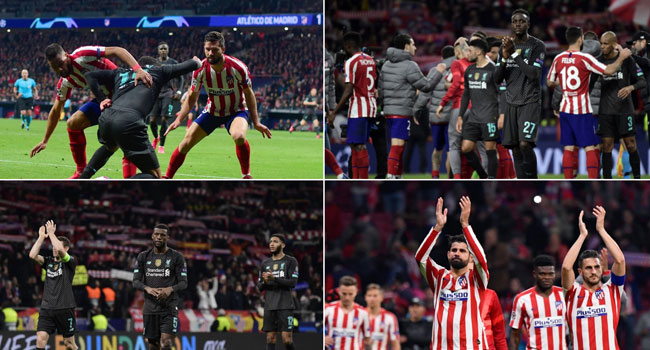 Liverpool will need another second leg fightback against Spanish opposition at Anfield to progress to the Champions League quarter-finals after Saul Niguez’s early strike handed Atletico Madrid a 1-0 last 16, first-leg victory on Tuesday.

The European champions thrashed Barcelona 4-0 after losing the first leg of their semi-final 3-0 in Catalonia last season and do not need such a dramatic turn of events this time round.

However, after romping to a 25-point lead at the top of the Premier League, defeat was a really check for the Reds that they will not have it easy if they are to retain the Champions League.

AFP Sport looks at three things we learned as Diego Simeone’s Atletico rolled back the years.

Atletico rise to the occasion

It was not just the holders’ relentless form in the Premier League that made Liverpool huge favourites to progress before the tie, but Atletico’s poor season so far that has seen Simeone’s future questioned for the first time in his eight-year reign.

However, on the big occasion, Atleti revelled in rolling back the years to play the role of underdogs to perfection.

Saul’s early strike provided the perfect platform for a classic Champions League performance from a Simeone side as the Spaniards soaked up Liverpool’s possession and pressure without Jan Oblak even being stretched to keep a clean sheet.

Another huge effort will be required to prevent another famous Anfield fightback on a European night in three week’s time.

A year ago, Atletico beat Juventus 2-0 at home in the first leg of their last 16 tie only to be eliminated by old foe Cristiano Ronaldo’s hat-trick.

However, thanks to a raucous atmosphere with Simeone characteristically playing the role of conductor, they at least preserved a proud home record in European competition under the Argentine with now 37 wins and just three defeats in 46 games.

Saul has been one of Atletico’s key players who has failed to match his normally high standards this season.

However, the Spanish international has a habit of coming up with big goals from midfield on Champions League nights.

He scored the only goal in a 1-0 win over Bayern Munich that took Atleti to the final in 2016 and was on target in another semi-final win against Real Madrid a year later.

Saul’s first in the Champions League this season was far from his most spectacular in the competition as he slotted home from close range after Liverpool failed to clear a corner.

But it was more than good enough to give Atletico hope of pulling off a huge shock.

Defeat may have been just Liverpool’s second with a senior team in all competitions this season, but both have come in the Champions League and follows a trend of difficult trips across the continent for Jurgen Klopp’s men.

The Reds have lost seven of their last 11 away Champions League games and are once again left relying on fortress Anfield to progress.

Despite enjoying nearly 70 percent possession, Liverpool did not manage a single shot on target against the mass ranks of Atletico defence on an off night for their two top scorers.

Sadio Mane was substituted at half-time as the Senegalese ran the risk of being sent-off before Mohamed Salah was also replaced by Klopp 20 minutes from time.