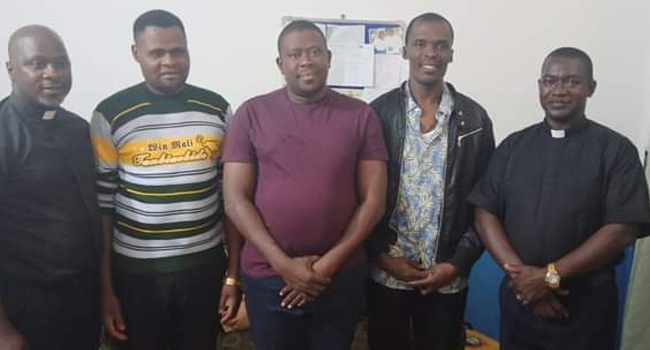 The three kidnapped students of Christ the King Major Seminary in Jemaa Local Government Area of Kaduna State have been released.

The chancellor of the Catholic Diocese of Kafanchan, Reverend Father Emmanuel  Okolo, said the three seminarians were released by their abductors on Wednesday.

But there is no indication that any ransom was paid for their release and the police are yet to issue a statement on the development.

While thanking God for the quick release of the seminarians, Father Okolo also prayed for the release of other kidnap victims who are still in the hands of their captors.

The three seminarians were abducted by bandits suspected to be kidnappers on Monday.

They were, however, released barely 48 hours after their abduction.

The abduction and release of the seminarians is one of the many kidnap cases in Kaduna and other northwestern states where banditry has become rife.

Following the series of attacks, several states in the region had introduced a string of measures to tackle the growing wave of insecurity.

In Kaduna State, for instance, the state government had shut telecoms services in some local governments, banned the possession of dangerous weapons and restricted the operations of tricycles among others.

“These difficult times demand that difficult decisions be made. The measures have been adopted purely in the interest of our collective safety and security and to aid our brave forces in their fight against these mindless criminals,” Commissioner for Internal Security and Home Affairs, Samuel Aruwan, explained while announcing the measures late September.

“Too many lives have been lost and too many families have been shattered. Small groups of wicked persons cannot continue to hold us to ransom and force us to live in perpetual fear.”