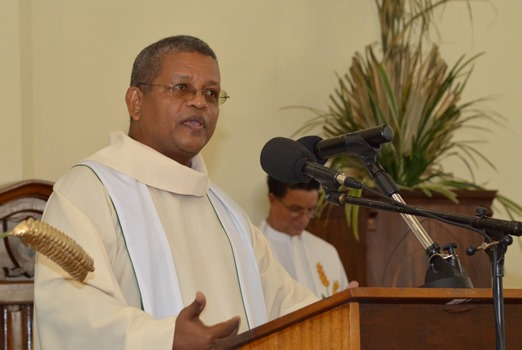 An Anglican priest is standing for election as President of The Seychelles in the nation’s general elections this week.

Over three days, 22-24 Oct 2020, voters will select members of the island’s parliament and from among three candidates for president: incumbent President Danny Faure of the United Seychelles Party, the Rev. Wavel Ramkalawan of the Seychelles Democratic Union, and Alain St Ange from the One Seychelles Party.

The United Seychelles Party has held power since a 1977 coup and maintained its hold on government following a return to democracy in 1993. However in 2016 Ramkalawan’s Seychelles Democratic Union won a majority in Parliament. Before 1993 the media was heavily censored and civil society discouraged from speaking out. Fr. Ramakalawan entered politics indirectly, as only the church was free to criticize the government under one-party rule.

Fr. Ramakalawan has run for president six times and been the leader of the opposition since 1998. In 2005, Fr Ramkalawan took a sabbatical from his clerical duties as rector of Holy Saviour parish in St Louis to serve as party leader in parliament.

The Seychelles tourist based economy has been hurt by the COVID crisis, with the country closing its borders in March and gradually reopening to foreign visitors in late June. Management of the economy order to devote himself fully to his political life at a crucial and important point in the country’s affairs. President Faure has focused on the economy in his campaigns, especially the rebuilding of national reserves; while Fr Ramakalawan has also focused on economic development and building civil society institutions.