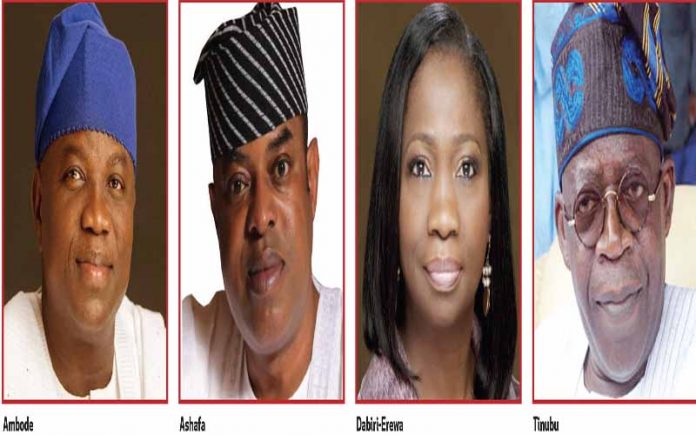 As the race for the vacant Lagos East Senatorial position has begun in earnest. Segun James in this report x-rays the contenders and their chances

Although the ruling All Progressives Congress (APC) remains embroiled in a leadership crisis at the national level, many political pundits believe the party is undergoing changes that will determine its future in the country.

For those following the polity closely, a positive change for the nation should come with evolving political parties; a changing political landscape and a new orientation and attitudinal change by the political leadership.

But in Lagos State, the race for the vacant seat of Lagos East Senatorial district following the sudden death of Senator Bayo Osinowo is what is occupying the front burner at the moment.

In Lagos politics, the guardians of orthodoxy in the aquatic state are not given to a capricious change of mind even though change is constant. This can be attested to in the number of legislators that have represented the state in the National Assembly in the last 20 years. But it is a change built on a system which confounds many.

To many people, the state has been pandering to the whims and caprices of one powerful man who has a hegemonic control over the political system, especially in the ruling APC. He is a former governor and the national leader of the. party, Asiwaju Bola Ahmed Tinubu who, alongside his loyalists under the defunct Alliance for Democracy, AD and later the Action Congress of Nigeria, ACN have retained power since the return of democracy in 1999.

But to other members of the party, if hegemonies are good for anything, it should be for ensuring harmony and stability in the system they dominate.

Before his demise, Senator Osinowo, who was elected last year after serving as a member of the State House of Assembly for 16 years was a power broker and political heavyweight in Kosofe, which is among the five local government areas that make up the Lagos East Senatorial District. Others are Ikorodu, Somolu, Ibeju-Lekki and Epe.

Curiously, all the councils but Epe have produced a senator to represent the zone and this according to analysts, has become a major factor that will be considered by party leaders in the quest for which part of the district should produce the next candidate.

Osinowo was an influential and charismatic politician whose influence cut across the state and a strong loyalist of Asiwaju Tinubu. He was also a dependable actor in the state APC in who much trust and confidence were reposed.

Although Pepperito, as Osinowo was fondly called, was not the first to rise from being a member of the state House of Assembly to becoming a senator, one of his predecessors, the Minister of State for Health, Dr. Mamora did go to the Senate after his stint as Speaker of the Lagos State House of Assembly; but he was the only one who spent 16 years in the state assembly before proceeding to the senate.

All these is no thanks to his reputation as a muscleman and a man who is not averse to violence. This may have been the reason why he got the senate ticket. In his one year at the senate, he was known for his taciturnity and refusal to contribute to robust debates on the floor.

With the death of Osinowo a vacuum has been created which requires a man who has the pedigree and ability to serve the interest of the state and the party in the upper house of the National Assembly. Until the coming of Pepperito, Lagos had always put its best foot forward in the National Assembly.

Although the district parades many APC gladiators with intimidating credentials who have begun underground lobbying, consultations and mobilisation ahead of the intra-party selection, most of the aspirants are also counting on the goodwill of Asiwaju Tinubu, who most believe will have the final say on who emerges the candidate.

Not surprisingly many of the aspirants jostling for the vacant seat are very close to Tinubu. So far the list include former Governor Akinwunmi Ambode, Senator Gbenga Ashafa, from whom Osinowo took over the senate position, Chief Lanre Rasak, the Balogun of Epe and member of the State’s Governance Advisory Council (GAC) who stepped down for Osinowo in 2019 and a dark horse in the race, Mr. Ganiyu Olusegun Abiru, a former Clerk of the State House of Assembly among other formidable political heavyweights.

But the big poser is: who does the cap fits? Without doubts, the party would decide the mode of the senatorial primary in Lagos East in post-Osinowo era. Another question is: will the party opt for direct and indirect primary? Considering that Lagos East is still in mourning and many members yet to recover from shock following Osinowo’s demise, an acrimonious direct primary will be unlikely and may be interpreted as disservice to the memory of the departed senator.

Ashafa was elected to the Senate of the Federal Republic of Nigeria as the ACN candidate from Lagos East in April 2011. He was again inaugurated as a second-term senator representing the Lagos East Senatorial District in the 8th senate on 9 June 2015. He was also a member of the National Executive Committee of the All Progressives Congress as well as the Vice Chairman (South West) of the Southern Senators Forum.

Ashafa was a former civil servant in the state and rose to the position of a permanent secretary. He went into politics after retirement.

He was rejected by the leadership of the party at the state level when he attempted a third term foray into the Senate.

Ambode, was the immediate past Governor of the state. He served only one term (2015-2019) in office. Before being drafted to contest for the governorship, Ambode was a career civil servant who had warmed his way into Tinubu’s heart.

As the Lagos State Accountant General, he was instrumental in keeping the leader in the know about financial situation in the state under Governor Babatunde Fashola. He was retired with ignominy for disloyalty by Fashola.

But, he was later drafted to take over from Fashola as governor. But towards the end of his first tenure, he ran into political stormy waters and was denied a second term term ticket.

Ambode is yet to mend his relationship with the leader and the leadership of the party in the district. Although some leaders in the party believes that he should be compensated with the position for the perceived injustice done to him during the last governorship primaries of the APC, his chances at getting the ticket are slim.

Probably the most experienced and eligible among the contenders jostling for the ticket, Chief Lanre Rasak, former Epe Council chairman, Lagos State ex-Commissioner for Public Transportation and was persuaded by Tinubu in 2019 to step down for Osinowo in the keenly contested primaries.

He joined the Tinubu’s camp from the defunct All Nigeria Peoples Party (ANPP) where he was a former National Deputy Chairman. If political seniority and maturity are factors, Rasak, who is a member of the Governance Advisory Council, the highest political advisory organ of the party in Lagos State should have no rival.

Rasak who is hugely popular is fondly referred to as KLM has been a stabilizing factor in the politics of the district and the state. Although his prospects were very bright in 2019, he withdrew from the race on conditions of honour and beauty by wholeheartedly stepping down for Osinowo in deference to Asiwaju.

Party leaders commended him for loyalty to the leadership and hailed his politics without bitterness stance on issues. Most Epe leaders who have been are clamoring for the zoning of the slot to Epe Division are believed to have Rasak in mind. He is a prominent Epe community leader held in high esteem by the divisional political class because of his pedigree as a philanthropist.

A former speaker of the State Assembly, Ikuforiji was a political godson of Tinubu until he pitched his camp with Ambode in the protracted and acrimonious battle for the governorship ticket last year. Until the battle for the vacant senate position commenced, Ikuforiji has not been active in the party politics in the state.

Ikuforiji was Speaker for 11 years. The former polytechnic teacher and lawyer holds a doctorate degree from a reputable institution abroad. He is from the Eko-Epe section of the ancient town, which he represented before moving to Ikeja Constituency.

Kasali hails from Ibeju-Lekki Local Government Area as Ashafa, where he was a council chairman before he became a commissioner for eight years.

Alebiosu, son of the prominent politician, Alhaji Busura Alebiosu, fondly called the ‘comrade capitalist,’ by Tinubu, served as Senior Special Assistant for Housing to the former governor before becoming a two-term federal legislator.

Pelumi, a lawyer and former speaker, is very active in the party, particularly at the zonal level, where he serves as secretary of the apex leaders’ forum.

Dabiri-Erewa, a former broadcaster who hails from Ikorodu, was a member of the House of Representatives for 12 years before serving as Presidential Senior Special Assistant for Foreign Affairs.

However, the contest is not an exclusive APC affair, although the APC flag bearer is the candidate to beat. Former Peoples Democratic Party (PDP) aspirants, particularly Abiodun Oyefusi and Babatunde Gbadamosi, are said to be reviving their ambition.

Indisputably, the APC leader and former Governor, Asiwaju Tinubu is not expected to be indifferent to the nature, tendency and idiosyncrasies of the would-be successor and therefore will make the final choice.

Although Pepperito, as Osinowo was fondly called, was not the first to rise from being a member of the state House of Assembly to becoming a senator, one of his predecessors, the Minister of State for Health, Dr. Mamora did go to the Senate after his stint as Speaker of the Lagos State House of Assembly; but he was the only one who spent 16 years in the state assembly before proceeding to the senate. All these is no thanks to his reputation as a muscleman and a man who is not averse to violence. This may have been the reason why he got the senate ticket