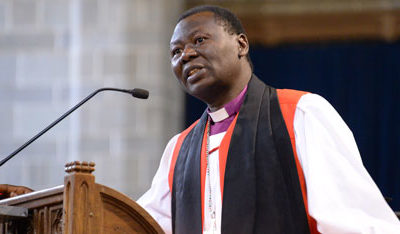 THE CATHEDRAL CHURCH OF THE HOLY TRINITY, LOKOJA

THE NAME THAT IS GREATER THAN SILVER AND GOLD

What a blessing it is that this year is beginning on a Sunday – the day we commemorate the resurrection victory of Christ over the powers of death. That gives us every reason to say a very Happy New Year 2023!

At this beginning of a new year, many people hunt for predictions and prophecies from all kinds of sources: men of God, soothsayers/fortune tellers, media opinion makers. Some read books by notable futurologists like Nostradamus, or check books on zodiac signs.

In this election year in Nigeria, the media is awash with predictions of how things will go. I have a pastoral responsibility to repeat the prophecy of Isaiah:

“And when they say to you, “Seek those who are mediums and wizards, who whisper and mutter,” should not a people seek their God? Should they seek the dead on behalf of the living?” (Isaiah 8:19, NKJV).

We must shine our eyes, we must not deceive ourselves or allow others to deceive us. You and I know what our experiences have been. Look at the track records of those asking your votes. Look at the condition of our country, the bloodshed, the insecurity, and do your part.

Those who are of voting age should use their voter’s card wisely and well. Do not sell your birthright and become a willing slave to deceivers who do not mean well for this country or for you. We must vote for those who respect our Christian faith and will guarantee freedom of worship without harassment. Many Nigerians have become professional fugitives in the nations of the world. God has given us some of the best brains In the world. They should be encouraged to contribute their part to the greatness of our dear nation.

Do not let anyone buy your votes or you will regret it and God will hold you accountable for the misuse of golden opportunities. Do it say it does it matter. Don’t let so-called friendship prevent you from doing what you should do under God. Those who are not of voting age should be involved in earnest prayer, because the election this year is more a spiritual battle than anything else. We must pray against those who do not mean well for this country.

Those who are INEC officials or election observers should be honest. We must not promote a situation where evil is called good and good is called evil. May God help us to do our part.

God promises to help us and guide us if we seek Him. Rather than running around the predictions of men, GET CLOSE TO GOD, GET FAMILIAR WITH WHAT YOUR BIBLE SAYS, AND BE MORE PRAYERFUL (both in private, and as families, and in the public prayer meetings). As we seek Him in His Word, in His Temple, in the prayer closet, in the  fellowship of His people, God will show us the way to go. These are God’s channels and the right environment for revealing His mind.

Let me encourage us with these words about divine guidance at the beginning of the year:

“Who is the man who fears the Lord? Him will he instruct in the way that he should choose.” (Psalm 25:12, ESV)

“The Lord confides in those who fear him; he makes his covenant known to them.” (Psalm 25:14, NIV)

“So then, my brothers and sisters, because of God’s great mercy to us I appeal to you: offer yourselves as a living sacrifice to God, dedicated to his service and pleasing to him. This is the true worship that you should offer. Do not conform yourselves to the standards of this world, but let God transform you inwardly by a complete change of your mind. Then you will be able to know the will of God—what is good and is pleasing to him and is perfect.” (Romans 12:1–2, GNB)

As a Diocese, our WATCHWORD for this year is: MY YEAR OF EVER-INCREASING GLORY, taken from “But the path of the righteous is like the light of dawn, which shines brighter and brighter until full day.” (Proverbs 4:18, ESV). As we live by the standards of God’s righteousness in Christ, by obedience, we will see the glory of God and eat the good of the land, in Jesus name, Amen.

Some Church traditions, including Anglicans observe the 8th day after Christmas as the Circumcision of Christ. This is in accordance with the covenant of circumcision as we read in our OT (Gen 17) We therefore enter the new year as people of the covenant. Our covenant is in the Lord Jesus Christ especially through the blood shed for our sins.

But we also focus on the name of Jesus, for on that same day of circumcision, a male child was named. And for Jesus, we read the message of the angel while announcing His coming: “She will bear a son, and you shall call his name Jesus, for he will save his people from their sins.”” (Matthew 1:21, ESV)

“On the eighth day, when it was time to circumcise the child, he was named Jesus, the name the angel had given him before he was conceived.” (Luke 2:21, NIV)

Without arguing about the right date of Christmas, we observe the biblical facts about the observances when Jesus was born. So, even if today had not been Sunday, we would have been in Church to worship on this day.

THE NAME OF JESUS

Of all the names of the Christ, the most commonly used is JESUS (used almost 600 times  in the gospels alone. It was a common name, and has the same meaning as Joshua, Jeshua, Jehoshua. It points to God as our salvation. God (Yahweh) saves

“Acts 3:1–8 (ESV): Now Peter and John were going up to the temple at the hour of prayer, the ninth hour.  2  And a man lame from birth was being carried, whom they laid daily at the gate of the temple that is called the Beautiful Gate to ask alms of those entering the temple.

3  Seeing Peter and John about to go into the temple, he asked to receive alms. 4  And Peter directed his gaze at him, as did John, and said, “Look at us.”  5  And he fixed his attention on them, expecting to receive something from them.  6  But Peter said, “I have no silver and gold, but what I do have I give to you. In the name of Jesus Christ of Nazareth, rise up and walk!”  7  And he took him by the right hand and raised him up, and immediately his feet and ankles were made strong.  8  And leaping up, he stood and began to walk, and entered the temple with them, walking and leaping and praising God.

This man had asked for alms for many for years — quite likely, even during the earthly of Jesus, but the alms people gave him never changed his condition. Peter and John were not ashamed to say they did not have silver and gold because they knew that had the name that is greater than silver and gold. So many In our nation have compromised their consciences because of money, but money can’t solve all problems. If anything money creates problems that it cannot solve.

When challenged about the miracle by the religious leaders, the response of the apostles is in Acts 4:8–12 (ESV): Then Peter, filled with the Holy Spirit, said to them, “Rulers of the people and elders,

9  if we are being examined today concerning a good deed done to a crippled man, by what means this man has been healed,

10  let it be known to all of you and to all the people of Israel that by the name of Jesus Christ of Nazareth, whom you crucified, whom God raised from the dead—by him this man is standing before you well.

11  This Jesus is the stone that was rejected by you, the builders, which has become the cornerstone.

12  And there is salvation in no one else, for there is no other name under heaven given among men by which we must be saved.”  NO OTHER NAME. Do not enter a new year with an old heart.

Philippians 2:8–11 (ESV): And being found in human form, he humbled himself by becoming obedient to the point of death, even death on a cross.

9  Therefore God has highly exalted him and bestowed on him the name that is above every name,

10  so that at the name of Jesus every knee should bow, in heaven and on earth and under the earth,

11  and every tongue confess that Jesus Christ is Lord, to the glory of God the Father.

Even if our political fortunes become ten times better, our greatest need remains the salvation that Jesus brings. That is the decision we must make without hesitation or procrastination. It Is my privilege to present God’s offer to you again. Talk to God.