Stopping The Spread Of COVID-19 Is A Joint Effort, Says Osinbajo 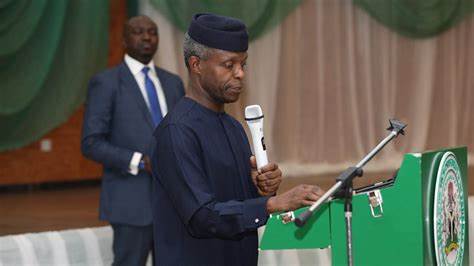 Vice President Yemi Osinbajo has asked all Nigerians to collectively work together to curb the spread coronavirus in the country.

The Vice President stated this on Monday at a Google Hangout organised by the HACK COVID-19 Call Centre in Abuja, the nation’s capital.

Osinbajo wants the masses to join hands together to defeat the pandemic, stressing that he is impressed with the response of the masses and governments at all levels.

“We must see this as a joint effort, everyone is involved in this, it really is an all-Nigeria effort and I am happy that everyone is responding,” a statement from Osinbajo’s spokesman, Laolu Akande quoted the Vice President as saying.

Reacting to how the Federal Government plans to support vulnerable Nigerians amid the restriction of movement imposed by President Muhammadu Buhari, Osinbajo replied saying: “The President has actually just established the Economic Sustainability Committee, which he has asked me to chair.”

The Committee is to take care of the economic challenges and fallouts of the pandemic and movement restrictions in the FCT, Lagos and Ogun States.

According to the Vice President, the committee will develop further palliatives, and a sustainability plan to reposition the economy and grow the non-oil sector.

“First of all we must admit that there is very little precedent for what we are doing today, this is not the sort of situation that anyone necessarily prepares for. But fortunately for us, we have, in the past few years, designed a social investment programme that tries to address some of these types of concerns.

“Part of the work of the Economic Sustainability Committee that has been constituted is to look at some of the concerns that affect the poor, especially in the context of what has already been done and the data that we already have on informal workers and informal traders and how to implement some strategy that will be able to alleviate the sufferings of the poor (and the informal workforce) at this time. And how to integrate some of the data that we have in other respects.

“So, we have data of the poorest of the poor, with the assistance of the World Bank, we have developed what is called the National Social Register where we mapped out, in practically all Local Government Areas in Nigeria, those who are considered the most vulnerable. Already, some of them get conditional cash transfers but, again, compared to the numbers, it is not large enough.

“But now we have an opportunity of doing much more in terms of giving the poor and vulnerable some kind of assistance,” he said.

Speaking further, Osinbajo said the N-power has provided “Opportunities for young Nigerians who have no jobs at the moment. Again, the President has asked that we take a look at that and see how we can enhance that and do more. This provides yet another opportunity to widen the scope and provide more.”