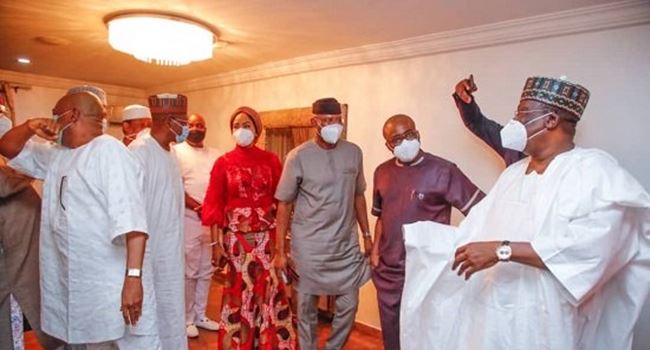 The President of the Nigerian Senate, Ahmad Lawan, on Thursday led some senators to the home of Senator Orji Uzor Kalu, who just returned from Kuje prison.

The senators, while posing for photos, refused to observe the social distancing order of the Federal Government to guide against the spread of COVID-19.

Kalu, the chief whip of the Nigerian Senate, had been in Kuje prison, Abuja, for over six months following his conviction by a Federal High Court in Lagos for an N7.1 billion crime.

The court had handed Kalu a 12-year prison term.

But the Supreme Court later declared the trial of Kalu and others convicted alongside him as a nullity. It also ordered that one of the convicts, Ude Jones Udeogu, a former director of finance and account of Abia state be released and retried.

Based on that, Kalu contended that no legal basis existed for his continued incarceration since the Supreme Court judge declared the whole trial a nullity.

Consequently, a Federal High Court in Lagos on Tuesday ordered for his release and based on that order, the senator was set free the next day, Wednesday.

Following his release, colleagues at the Senate visited him on Thursday wearing face masks but disregarded social distancing directives.