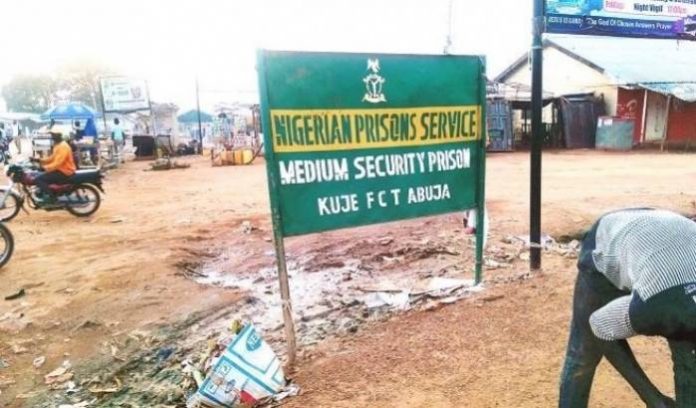 A former National Publicity Secretary of the Peoples Democratic Party, Olisa Metuh, joined Kalu and Dariye at the centre on Tuesday, following his conviction of N400m fraud by the Federal High Court in Abuja, which imposed seven years’ imprisonment on him.

The Comptroller General of NCS, Ja’afaru Ahmed, dropped the hint that security at the facility had been beefed up, after declaring open, on Wednesday, a three-day National workshop on Welfare/Insurance Scheme for Officers of the NCS across the country.

Ahmed said there was no cause for alarm on the concentration of high-profile prisoners in the Kuje Correctional Centre, Abuja, stating that it was the nearest custody to the FCT where most of the cases were determined.

The CG said the service would not prevent the convicts’ lawyers and families from seeing them as many of them have pending appeals.

He said, “Remember that most of them are also going on appeals, some their appeals have been exhausted up to Supreme Court and others will still go up to that level. So, we will allow their lawyers and family members to come and see them to interact.

“But it will be conducted within the rules because the service had its own standing orders and every correction officer knows the procedures of conducting visits for both convicts and those awaiting trial.”

Speaking on the theme, ‘Planning for the Rainy Days through Skill Acquisition and Entrepreneurship for self-sustenance,” Ahmed said it would prepare officers and men of the service for the future.

He said it was gratifying to observe a few days ago that Correctional Service Multi-purpose Society had recorded over N1bn in its account while its subscription had gone up by 50 per cent, meaning that people receiving benefits of N30,000 would now get up to N2m.

He added that the Correctional Welfare Insurance Scheme had settled 2,408 retirement benefits between 2016 and 2019 while 548 medical claims and 593 death claims were also settled within the period.