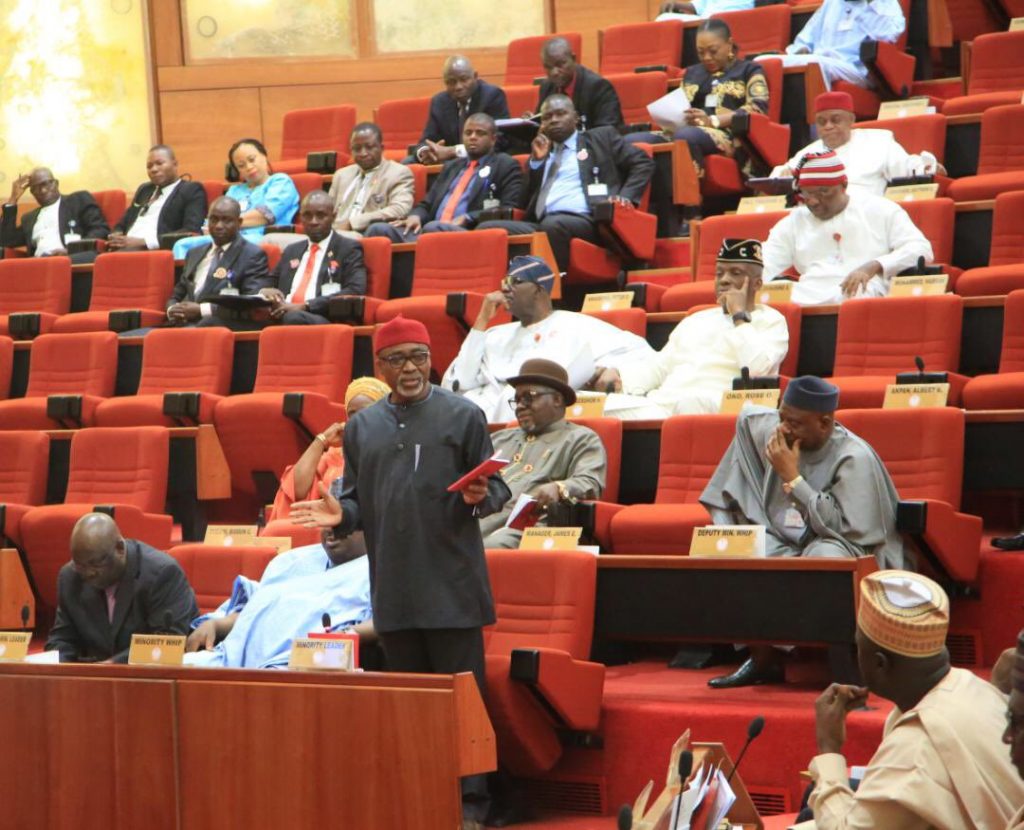 The Senate and the Niger Delta Development Commission (NDDC) bickered yesterday over alleged inclusion of projects worth N80 billion in the commission’s 2019 Budget by the National Assembly without the consent of the executive.
The Executive Director, Projects (EDP) of NDDC, Dr. Cairo Ojougboh, had made the allegations yesterday while featuring on The Morning Show, a programme on ARISE NEWS Channel,
He stated that unknown to the National Assembly and other members of the Committee on NDDC in both Senate and the House of Representatives, the two chairmen, Senator Peter Nwaoboshi and Hon. Olubunmi Tunji-Ojo, “raised and vandalised” the commission’s 2019 budget.

But in a swift reaction, the Senate said the commission was exhibiting ignorance about the constitutional power of the National Assembly to perform oversight functions over all entities that expend national funds, particularly to prevent or detect corruption.
But Ojougboh said: “The problem we have with these two chairmen is that when we submitted our budget, they vandalised our budget, they raised our 2019 budget. NDDC must be allowed to function. The purpose of which it was instituted must be allowed to happen.

“If you look at what the two chairmen did in the National Assembly, all the regional projects of Mr. President were removed from the budget. Look at what they infused and injected the total sum that they brought is N85 billion new projects. They removed annoyingly the regional projects of Mr. President. When the forensic audit is concluded, Nigerians would be shocked.”
The director added that the commission’s 2020 budget estimate submitted to the National Assembly two months ago had not been worked on due to the insistence of the two NDDC committees’ chairmen.

“We submitted our 2020 budget two months ago; nothing has been done about it. The two committee chairmen sat on it, asking for anything they want to ask for and we said no, it cannot happen.
“As we speak the budget of 2020, go and ask them, where is it, by now we should have had the budget. The 2019 budget we are arguing about in the middle of 2020, this is May going to June, when are they going to give us our budget? Ask the chairmen,” he said.
According to him, the forensic auditing is already on after it passed through due process and is being carried out by a reputable international company.

“As we speak, a lot of monies, hotels, property have been seized and these people – contractors who have taken money and they didn’t do the job, the people who championed this corrupt thing, all of them are jittery. When we handed over all the documents of the NDDC to the forensic auditors it was on national TV; heavens were let loose, for they know the end is coming.”
He noted that the Interim Management Committee (IMC) was being attacked because it said standards must be delivered as regards the forensic audit of the commission.
He said some people who are afraid do not want the international company handling the audit to do it, because they wanted to give it to a charlatan.

He said: “If Godswill Akpabio (Minister of Niger Delta Affairs) wanted to steal money, the N1 billion every month would have continued; if Akpabio wanted to steal money, the N3.7 billion that the chairman asked would have been paid; they would have shared to Akpabio, but we said no, we want to rescue the NDDC.”
On the allegation that Akpabio was out on a witch-hunt mission, targeting past managing directors, Ojougboh described it as laughable.

He explained that the forensic audit was not initiated by Akpabio, but it came as a result of the visit of the governors of the nine oil-producing Niger Delta states to Buhari, where he was told about the massive corruption in the commission, adding that the president acted on that and instituted the probe.

On the issue of alleged N40 billion fraud in the commission, Ojougboh said it was not possible to squander that huge amount of money, especially with the necessary checks and balances (Remita) now in place.
He said all the money spent by the commission and how it was spent could be verified from the Central Bank of Nigeria (CBN) and the Accountant General of the Federation.

He said: “I don’t mind leaving this seat I’m sitting on; I must give a good account of myself. I have lived all my life based on my integrity and my values that mean more to me. I have an integrity and a name to protect; nobody can just jump and say I have squandered N40 billion; where? How? Enough is enough.”

Reacting to NDDC director’s allegation, Chairman of the Senate Committee on Media and Public Affairs, Senator Ajibola Basiru, told THISDAY that Ojougboh “must be exhibiting ignorance about the constitutional power of the National Assembly to perform oversight functions over all entities that expend national funds, particularly to prevent or detect corruption.”

According to him, “The integrity of the Senate is not here an issue by the fact that someone is obviously ignorant of the workings of the Senate or being mischievous. The Senate is acting within its constitutional mandate and the appropriate forum to challenge any perceived infraction by the National Assembly is to challenge same in a court of law not by wild claims on a television station.”
He said the National Assembly would wait to see if the NDDC will fail to honour the invitation to be extended to it by the ad hoc committee probing the alleged N40 billion fraud at the commission.
“We wait to see whether the NDDC will refuse any invitation by the ad hoc committee when the work of the committee resumes,” he said.