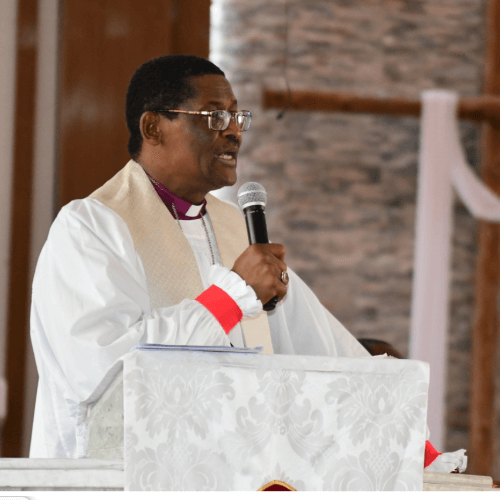 The Primate and Archbishop Metropolitan of the Church of Nigeria Anglican Communion, The Most Rev’d Henry Ndukuba revealed that he would have died of heart attack on 25 June 2014 but for the late Galadima Dr GTN Ajakpo whom God used.

The Primate made this disclosure in his sermon during  service of songs  for the late Chief Dr. GTN Ajakpo at The Cathedral Church of The Advent Abuja.

He narrated: “I had a heart attack while doing the work of the liturgical and spirituality committee of the church of Nigeria in Abuja here, but few weeks before then i had had the first encounter, in which the veins, arteries supplying the blood to my heart one part blocked completely while we were at retreat with the clergy of Kaduna province.

“I didn’t know what was happening but to cut the long story short, when the last one happened in Abuja here, Thank God that it was in Abuja here, I was left with 10% of blood supply to my body because the remaining artery was also blocked 90% leaving only 10%

“While I was reeling in pains  almost passing out, I was rushed to Ajakpo’s hospital who was in a meeting so he called his doctors to take care of me, the doctor managed me till he came back, when he came back he prayed with me just as it had been testified here. He prayed with me and he looked at me and said my lord this is a very serious matter and I have to refer you to my friend who is a cardiologist so he referred me to Dr onye Achillihu  and I was taking to Dr onyes clinic and I was booked for examination and he passed something into my heart, he took video of the heart and every other thing.

“While i was struggling in that hospital bed the Lord spoke to me and said Henry this problem is not your problem I have prepared skilled hands to handle this problem, while  former Primate Baba Okoh was making arrangements to fly me out for medical attention, when that word came I was certain in my heart that the Lord will handle the case, the Primate was even more afraid when he heard that Iwill be going to UNTH Enugu for treatment and he remembered that one of his priest lost his wife at UNTH Enugu who went for such operation and never came back he didn’t say it but the word of the Lord to me  in that hospital strengthened us to know that God is present here and he has taken charge and he would help me  connected with Dr Onye and Dr Onye was also in connection with a team that was coming that weekend to University of Nigeria Teaching Hospital Enugu UNTH to do the operation

“We flew out of Abuja on Sunday and by Wednesday 25th of June 12 or 14 hours operation was done on this person at UNTH Enugu through the instrumentality of help and assistance of this servant of God, if it were not him connecting us and knowing what the mind of God is at a time like that i would have been a dead person by 25th June 2014 and that is why I tell people I am now living in the injury time, i have finished the 90 minutes of the play and the Lord has payed me I didn’t know that I will be standing here today and if anything will count this minute and this time giving to this man standing before you today it will be for his glory”

“Brothers and sisters, the death of our brother Dr Godwin Ajakpo the Galadima of Lokoja has called us into such a solemn assembly as this and I can hear the lord asking us what is the time now for me and you, for our brother he has fought the fight, it is over, even if you give him another opportunity to come back here on earth he will not because he is in a better place.