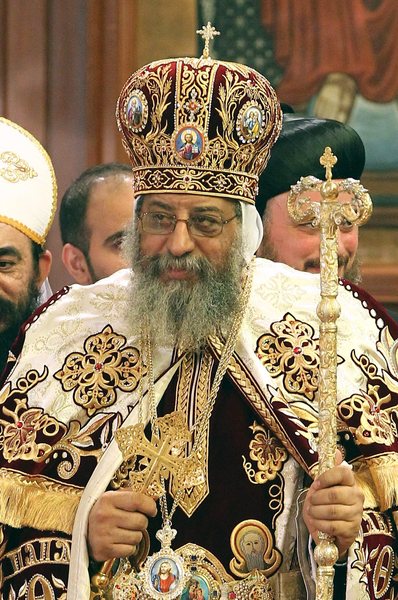 The new Pope Tawadros II leader of the Egyptian Coptic Orthodox Church looks on the enthronement ceremony, at the St. Mark Cathedral in Abbasiya, Cairo, Egypt, 18 November 2012. Pope Tawadros II the 118th pope of the Coptic Orthodox Church will lead the largest Christian community in the Middle East, thought to make up around 10 per cent of Egypt's Muslim-majority 90 million population. EPA/KHALED ELFIQI ** Usable by LA Only **
Share
Facebook Twitter LinkedIn Pinterest Email WhatsApp

The Coptic Christians of Egypt who go on pilgrimage to Jerusalem do not contravene any provision of the ecclesiastical authority.

The prescriptions laid down in the past by the leaders of the Coptic hierarchy, which in the historical context marked by the Arab-Israeli conflict had given instructions to its faithful not to go to the Holy City, are now obsolete and outdated by history. These are the considerations that Patriarch Tawadros wanted to repeat clearly during a television interview broadcast on January 7, on the occasion of the Coptic Christmas, with the clear intention of sweeping away the hesitations and controversies that continue to stop many Coptic Christians from going on pilgrimage to Jerusalem.

In the interview, Pope Tawadros recalled that the chronicles attest to the presence of a Coptic bishop in the Holy City since the 13th century and pointed out that the suspension of pilgrimages from Egypt has also contributed to reducing the presence of Copts in Holy Land. The Coptic Patriarch also recalled the repeated invitations to Jerusalem that Palestinian President Abu Mazen issued to Egyptians during his official visits to Egypt.

As early as 2016 (see Fides, 26/4/2016) it became clear that the bans on Coptic pilgrimages to the Holy Land were no longer justified and were no longer perceived by the Copts as binding. That year there was an exponential increase in Egyptian Coptic pilgrims who came to celebrate the rites of Holy Week in Jerusalem. This spontaneous influx of Coptic pilgrims to the Holy City marked the overcoming of the ban on visiting Jerusalem that had been imposed on its faithful by the then Patriarch Shenuda III in 1979.

In the years in which the Arab-Israeli conflict was radicalizing, Coptic Patriarch Shenuda III (1923-2012) had forbidden the faithful of his Church to make pilgrimages to the Jewish state and had not changed position even after the normalization of relations between Egypt and Israel. This ban was never formally lifted, but in 2014 the trip of about 90 Coptic Christians to the Holy Land during Holy Week had prompted several observers to emphasize the outdatedness of the disciplinary provision against pilgrimages in the context of the existing relations between the two neighboring countries.

The trip of Patriarch Tawadros II to Jerusalem to attend the funeral of Archbishop Abraham, the head of the local Coptic Orthodox community, in November 2015 certainly contributed to the further promotion of Coptic pilgrimages to the Holy Land. The patriarch’s trip, initially presented as an “exception” by the Coptic Orthodox Church, was understood by the Egyptian Copts as an eloquent sign that the new Patriarch had no intention of defending prohibitions penalizing the spiritual life of the faithful.