Ondo State Governor, Arakunrin Akeredolu, SAN, has warned marauders to stay away from the state, stressing that the people of the state and South-West at large would not be slaves in their own land. 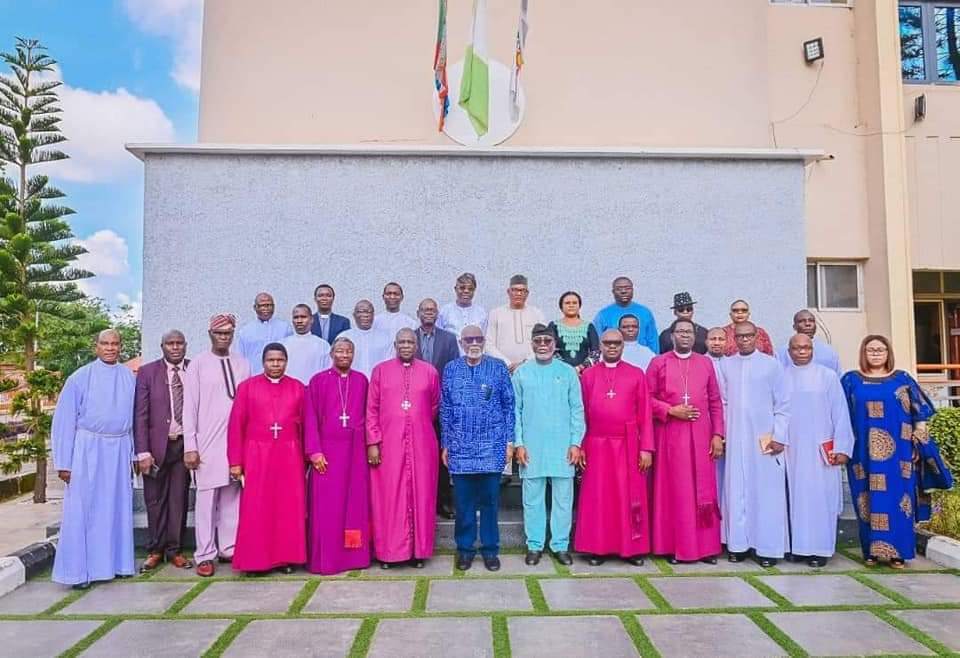 The Governor reiterated that the people of the South-West have come to the country in peace and would resist any attempt to visit the region with war.

Governor Akeredolu spoke while receiving a delegation of Ondo Province, Anglican Communion, led by the Archbishop of Ondo Province and Bishop of Akure Diocese, His Grace, the Most Revd. Simeon Borokini.

Archbishop Borokini was accompanied by Bishops of Owo Diocese, Dr. Stephen Fagbemi; Bishop of Ile-Oluji Diocese, Abel Ajibodu; Bishop of Ondo Diocese, Stephen Oni; Bishop of Idoani Diocese, Adegoke Agarra, among several others, who were on a condolence visit to the Governor in his office.

The Governor who described the Owo June 5 church attack as indescribable carnage, however, assured that efforts would be made to prevent such calamity from happening again.

“I’m sure you have visited the Catholic Bishop of Ondo. We are all grieving; it is not limited to Catholics. But this incident happened at St Francis Catholic Church, and it hit them directly. No doubt, it was carnage on the 5th of June in Owo.

“I was in Abuja and I got several calls and in less than three hours I was already back in Owo. I visited the scene of the crime. When I got there, it was still a bit fresh; I saw pools of blood inside the church here and there. It was very clear to us that the people that came, came to maim and kill and no other thing.

“They did not kidnap anybody, they did not take a penny, neither did they ask the people for their phones. After blasting the alter, they still went to the Sacristy and killed those hiding there. They started shooting from the gate of the church, according to the account of those who were there.

“I have been to the hospitals severally. When you get to the hospital and see people who suffered from gunshots and those who can tell the story of their relatives like the woman whose daughter also suffered gunshots, who said she lost her only son who is studying Pharmacy in the university. That child would probably still be in the university if not for the ASUU strike.

“If you get to the hospital and see a nurse who walked into St Francis to pray and today, she has no leg again. Her two legs have been amputated.

“When I got to the children’s ward, that was where I wept because I was convinced and said, what can you call the sins of these children. It did not make sense. You killed many children. Who will not weep? Is that a scene to be happy about? What have these children done? Do they deserve this?

“What happened is indescribable. I keep repeating it, these are animals. You must have lost your sense of humanity to carry out such a dastardly act against the defenseless people. But as Christians, we will keep thanking God because, in all things, we must give thanks.

Earlier, Bishop Borokini while commiserating with the Governor, the Catholic church, the people of Owo, and the state at large, noted that the dastardly act has really affected so many things and as well destabilized everybody.

He disclosed that all the Bishops saluted the courage and action of the Governor in protecting the lives and property of the people of the state and the South-West at large through the establishment of Amotekun Corps.

“I know your commitment when it comes to security matters. Everybody including Bishops acknowledges your role in the establishment of Amotekun. Seriously, the incident that happened in Owo came to us as a surprise, and we know you are destabilized. We know how painful it is to you and all of us.

“You are one of us, you are part of the Anglican Church, you are Chancellor of Owo Diocese and we are very proud of you. We came to identify with you and also share in this grief that has occurred. We are all pained, we are not happy about it. So, we share with you at this time of grief, it concerns every one of us and we are solidly behind you in prayers and other things we can do’, the Bishop said.

Chief Press Secretary to the Governor of Ondo State.