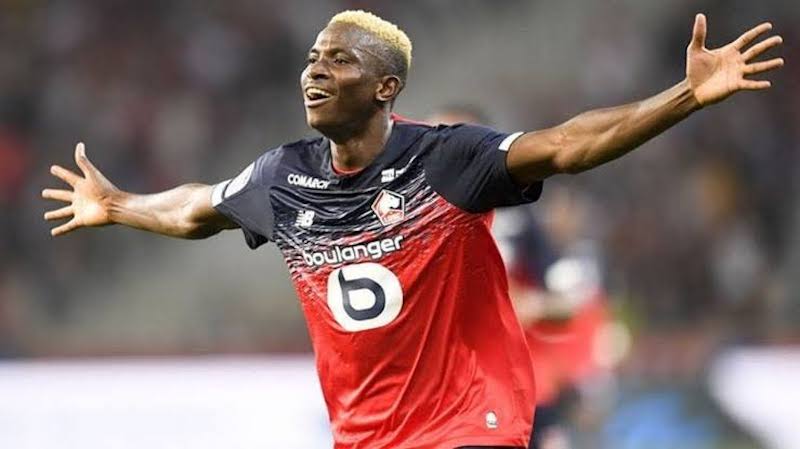 The 2015 FIFA Under-17 World Cup winner with the Golden Eaglets was yesterday voted the winner of the 2020 Marc-Vivien Foe award instituted in memory of late Indomitable Lions of Cameroon player, Marc-Vivien Foe who slumped and died in France during a Confederation Cup tournament in 2003.

Interestingly, Osimhen who succeeded 2019 winner Nicolas Pepe at Lille is also the second Nigerian to win the top honour after Enyeama emerged African Best player in France in 2014. Pepe left Lille for Arsenal.

Enyeama who is a former Nigerian Captain was outstanding between the sticks for Lille that year to be so honoured.

Osimhen who won the award ahead of established Monaco’s Algerian striker Islam Slimani and Reims’ Moroccan Yunis Abdelhamid, becomes the youngest winner of the trophy at just 21 years.

In the Belgian Jupiler.

He scored 13 goals with four assists in 27 Ligue 1 matches for Lille before the season was cancelled due to the Covid-19 pandemic.

He was voted as the winner by a panel of 100 journalists, according to the award organisers French radio station RFI and television station France 24.

They say they decided to keep this year’s award despite the Ligue 1 season ending in April, before its completion, because of the Covid-19 pandemic.

Osimhen who returned to France at the weekend after the burial of his late father, Patrick Osimhen is yet to resume training with Lille.

PAST WINNERS OF THE AWARD INCLUDE;