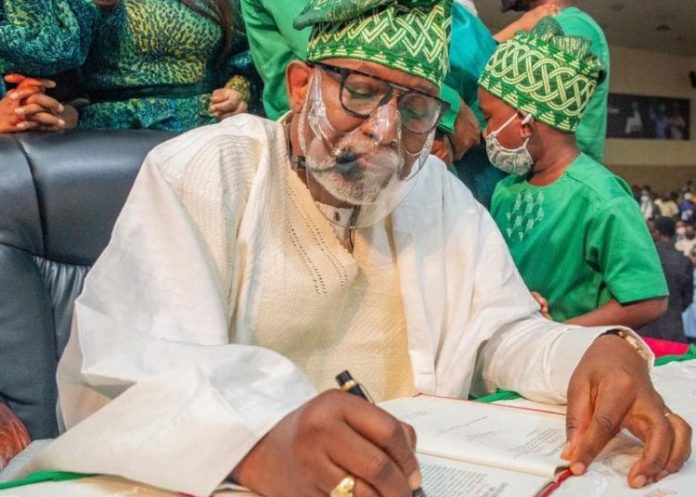 Ondo State Governor, Mr. Rotimi Akeredolu, Wednesday renewed the clamour for the decentralisation of the nation’s policing system to empower sub-nationals to secure their spaces.

Akeredolu, at his inauguration in Akure for a second term of office said every state must be allowed to secure its space.

He added that the next four years in office is not for relaxation.

According to him, given the pervasive security crisis in the country, it has become imperative for Nigeria to have a state police cadre, adding that the clamour propelled South-west governors to form a regional security network codenamed ‘Amotekun.’

He said: “The primary responsibility of any government is the security of lives and property of its citizens.

“We are of the firm belief that it is high time the police central command became devolved to the federating units for effective monitoring.

“We have been relentless in advocating the establishment of state police. There can be no other way if we are indeed serious about securing lives and property.

“It is this incongruity which propelled the South-west governors to form a regional security network codenamed Amotekun.”

He said the aim was to convince other stakeholders in the Nigeria project to “understand that devolution of authority is inexorable.”

He hailed the Amotekun outfit, saying it has recorded successes that justified its establishment.

“It has been able to work within the law establishing it. Its operations and successes recorded justify its establishment,” he added.

Akeredolu was inaugurated along with his deputy, Mr. Lucky Ayedatiwa, who replaced Mr. Agboola Ajayi, who was his deputy in the first term, and fell out with his principal over his ambition to contest the last governorship election, which he lost.

Akeredolu, in his inaugural speech, tagged “Pathway to Redemption,” said he would not depart from his chosen path, which earned him a second term in office

He said: “We shall continue, with more vigour, to justify the trust earned by our administration. The second term, for us, is not a time for relaxation.

“We are not under any illusion that it will be easy. We are, however, ready to proceed on the journey with renewed enthusiasm and vigour.”

Akeredolu, who highlighted some of the achievements of his administration in the last for years, stated that many dynamics have come into play since he took over in 2017.

He said the change necessitated the need to review the administration’s agenda, adding that in the next four years, his administration will be pursuing a totally repackaged programme christened REDEEMED.