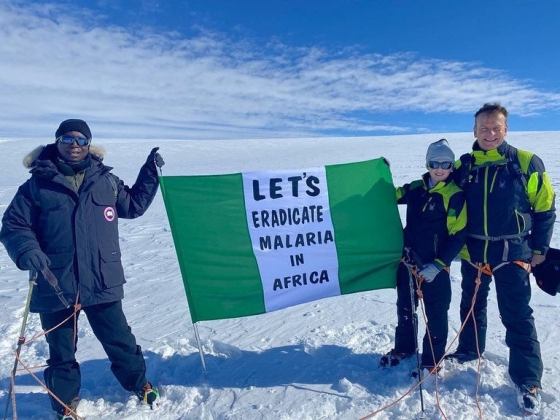 Renowned billionaire, entrepreneur, public health environmentalist, and Chairman, Ned Nwoko Foundation, Dr Ned Nwoko, has landed in Antarctica for the symbolic flag-off of his multi-billion naira malaria eradication in Africa project. Nwoko, a former member of the House of Representatives and the first Nigerian to explore Antarctica, is using the expedition to draw global attention to the scourge of malaria in Africa. He is being accompanied on the expedition by a team of scientists from Russia, India, China, the USA, and the UK.

Nwoko who posted the development on his Instagram page wrote: “Today, I finally made it to the coolest place on earth, the lowest point of the earth and the largest wilderness on the planet. We are living in Antarctica!!! I will be meeting with the various research stations to see how we can partner on the Eradication of Malaria in Africa.

“Join me as I embark on the much-awaited expedition to Antarctica in pursuit of anti-malaria vaccine and eradication of malaria in Africa. Agency reports indicate that the historic expedition began from Abuja en route Cape Town, South Africa on Sunday 5th January 2020. His two-pronged approach involves fumigation of Africa and funding research endowments for a malaria vaccine in five universities across Africa to the tune of $750,000. It was gathered that each university will receive a research grant of $150,000. READ ALSO: Ned Nwoko takes Malaria-free Africa campaign to Antarctica Preparatory to his departure from South Africa, Nwoko who went through a safety briefing on the trip, was spotted with Captain Hamish Harding and a teenager, Giles Harding, the youngest human ever to visit Antarctica.

His words: “Malaria is a majorly African problem. If you understand that, then you will comprehend why there is no concerted effort to find a permanent cure to it. “There is no family in Nigeria that has been spared. No family that has not lost some loved relatives,” he asserted. Further, Nwoko who was irked that many often forget that malaria is the biggest killer disease in Africa vowed to awaken Africa and the world as a whole about the dangers posed by the pandemic.

He remarked that it is the need to draw global attention to the monumental health challenge and the imperative of finding a permanent solution to it (malaria) that nudged him to embark on the audacious expedition to Antarctica to formally launch the malaria eradication campaign.

Nwoko explained that the journey towards a malaria-free Nigeria and Africa is not just worthwhile but realistic. “In the project, the Ned Nwoko Foundation will work with national and multilateral organisations to realise its goal of ridding Africa of mosquito and malaria. “We will equally collaborate with governments, private organizations and civil society towards achieving our core objective of extending malaria intervention programmes beyond the threshold of control and palliatives. “We have our eyes fixed on a permanent solution to the age-long scourge,” he stated as he left Africa for Antarctica.”

Nwoko Foundation Statistics from the World Malaria Report 2019 published by the World Health Organization, WHO shows that six countries accounted for more than half of all malaria cases worldwide are Nigeria (25 percent), the Democratic Republic of the Congo (12 percent), Uganda (5 percent), and Côte d’Ivoire, Mozambique and Niger (4 percent each). In 2018, according to the WHO, Nigeria accounted for almost 24 percent of all global malaria deaths, followed by the Democratic Republic of the Congo (11 percent), the United Republic of Tanzania (5 percent), and Angola, Mozambique, and Niger (4 percent each). Children are the most vulnerable group affected by malaria