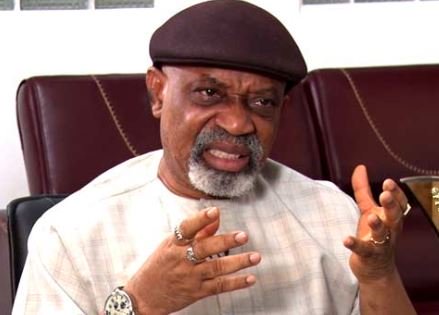 THERE are fears that the implementation of the Stephen Oronsaye Committee report may lead to the scrapping of some MDAs and subsequent job loss. What is the true situation?

First and foremost, we are not using the Oronsaye’s report hook, line and sinker and we are not going to implement. What has happened was that some time in the second coming of President Muhammadu Buhari, in consonance with his campaign manifesto, which was to restructure government and make it leaner and more efficient a committee was set up, a presidential committee called presidential committee on salaries and wages and the chairman is the Minister of Finance, Budget and National Planning, Zainab Ahmed, I am the co-Chairman, the Head of Civil Service of the Federation is a member. We have the permanent secretary in the Ministry of Finance as member and we have the Director- General of the Budget Office as member – secretary. That committee has a term of reference and the term of reference in the main, is to bring down the personnel cost of government – salaries and wages and allowances. Because we discovered that the recurrent expenditure alone was one third of the budget and that salaries, wages and allowances, with running cost of government was 85 per cent of budget. So government became alarmed and set up this presidential committee. We were first and foremost, to recommend way to get down this recurrent expenditure from 85 per cent and we were also to freeze all salaries and allowances and people in the public service sector salary structure were asking for augmentation and special allowances. That was one of the terms of reference given to us. And we were also to explore the revision across board of all the salary structures to make sure the normalisation of the different disparities that have been noticeable in the salary structures where people who are doing same work and hour of work are paid different wages. That’s one of the things we are to do because the constitution says equal work, equal pay. Same work, equal pay without discrimination based on sex, creed or tribe. So this is one of the terms of reference. Finally, we were supposed to look at the various institutions of government recommend those institutions that are actually doing the same work, duplication of functions so that those institutions can be merged. This is what people are now calling the Oronsaye report. The Minister of Finance called it the Oronsaye report and its white paper, to some extent she is right because that Oronsaye report and its white paper, even though the report was discredited, even though the white paper couldn’t even agree with the Oronsaye main report in about 70 per cent of cases because disagreed with them and in some cases, they didn’t have any recommendation at all. But the Oronsaye report you can’t throw it away like that. What we in our committee said was that if we can use some aspect of it and look at it and discuss it and after our report has been sent a white paper committee will discuss on it by this government. Not that we are implementing the Oronsaye report, no. The Oronsaye report is one of the documents, raw materials with which that committee was working; the presidential committee on salaries and wages. So I want it to be clear that it is not the Oronsaye report simplicita that is being implemented. If you look at what the Finance Minister said, she said review of the Oronsaye report and white paper which means it is not an adoption. We are not going to adopt it. That is it. On the fear of merger, there are certain government institutions, parastatals that are no longer even alive. I give you an example, a place like NERFUND, it is no longer functional. There are other institutions that have be wind up like NERFUND and they are there. Government will have to scrap them. There are other institutions that are doing about the same functions, we will look at them. If you look today, entrepreneurship for example, a lot of institutions are doing entrepreneurship and they are all being funded by government. So government will look at situation where those places are merged and when we merge them and combine the staff there, the staff there will have to be redeployed to areas of needs. There has been some new creation (of ministries) by government. The government has created the Ministry of Humanitarian Affair, Disaster Management and Social Development. That ministry is a new ministry, they are not employing new persons. They are taking persons from other ministries and agencies of government there. This is a typical example. So it doesn’t mean that people will start losing their jobs. The major target in the merging of ministries is to reduce the overhead cost of the place. Government has to make some savings on the running costs and of course, this government doesn’t want to throw people on the streets so we will be mindful of that in doing so. There should be no fear. Mr. President has assured workers that even post-Covid -19, that our interest is to retain the existing jobs and even create more jobs.

Already some MDAs have compiled a list of civil servants that would be laid off with some of them being issued letters of compulsory leave ahead of the planned layoffs. How would you react to this?

I am not aware, I don’t think there is an iota of truth to it. But if you know the MDAs you can let us know but I am not aware. If there is such thing happening in MDAs, the National Civil Service Union and Association of Senior Civil Servants they would have petitioned myself and the Office of the HoS. It is only the Office of the HoS that can do that. If there are parastatals doing that they must first seek the permission of their parent ministry before doing that. So I am not aware and I don’t think it is true but if it is true then such an agency and the head of that agency, they are on their own. They don’t have our approval for now to even compile any names not to talk about putting them (workers) on compulsory leave. I do know that in the NDDC, there were some people put on compulsory leave but that’s an administrative matter. When some people are being investigated and they don’t want them to interfere with the investigation, government usually ask such people to go on leave. If there is even a first line discovery of breach of rules in terms of maybe procurement, in terms of fraud, government can place you on suspension. This is what I know as far as that issue is concerned.

From available information members of the organised labour unions are already mobilising their members for a showdown. Can the country afford another labour unrest at this critical time?

They (unions) are seeing danger where there is none. Nobody has communicated anything to them officially. What the Minister of Finance said – I kept on saying it; is that the Oronsaye report and its white paper will be reviewed. What she meant is that it will be brought into the floor of this government. First of all, at our level at that Presidential Committee on Salaries, Income and Wages, we have detailed the Oronsaye report as one of the documents, raw materials we chose to work. We have even the El-Rufai report on the restructuring of the civil service, we have also the Afolabi report and we have also even of recent, the Prof. Itse Sagay Committee (PACAC) report. We are going to gather all those documents- all of them will be used and if they lead to the interrogation of the MDAs we will do so. We only did the first phase of the work which is how to get down the personnel cost and a temporary recommendation went to Mr. President which he has approved; that placed an embargo on federal recruitment of staff and replacement of staff in MDAs except for the MDAs that are responsible for defense and health matters.

Beyond rhetorics, what are some of the stopgap measures the Federal Government plan to implement in order to ease the burden of those who might be affected?

Of course when you merge agencies and parastatals – we don’t think so many of them will be merged, but when they are merged, the target is for us to save money in terms of running cost. But where also you have personnel overlap we will look for a way first to redistribute the overlap or the surplus personnel to those who have need for them. So we will send them to where they are needed. If you come back to a parastatal with the same schedule, of course, one has to go to another institution and in an institution where you have persons either leaving the service or dropping out from the service, those people will take those personnel. The main idea being that government is not desirous to lay people off. But if Los, you have places where you have surplus personnel and some people opt to go, of course government will accept such voluntary withdrawal of service and we will also pay the necessary emolument for such officers to depart the service.

The OPS made some proposal to the government to help cushion the effects of the fallouts of COVID 19 on businesses such tax holiday among other incentives. How far has the government gone in acquiescing to their demands?

Why not. We have gotten their proposal and I have passed it on to the Economic Sustainability Committee which Mr. President set up to look at the issue of Covid -19 pandemic, the economic effect on both the public and private sector. The federal government is studying the proposal to know where we will also come in because the essence being that we don’t want excruciating pain will result from these closures that will led to job losses in any way.

What should Nigerians expect in the coming weeks?

We want to make our health workers happy so we are targeting and getting more personal protective equipment (PPE) for them so that they can be more protected. We are also targeting that in the coming weeks we should be able to pay them their enhanced hazard and inducement allowances. The payment will begin very soon. There is another committee fine tuning it. We are going to pay them for two months at least – April and May. That is what to expect and we also expect that God will assist us to open up our economy and bring down the pandemic so that the rise we are now experiencing will flatten out so that we can start going back to our normal way of life.