Clergymen in the Diocese of Awka and other faithful in Anglican Communion converged at the Cathedral Church of Saint Awka for the Maundy Thursday Service. 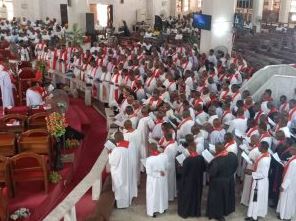 The service presided over by the Archbishop, Ecclesiastical Province of the Niger, Most Reverend Alexander Ibezim was to commemorate the services of Jesus Christ during Passover.

The service which featured a renewal of ordination vows, the consecration of chrism oil, and washing of feet of the clergymen by Most Reverend Ibezim prepared the ministers who would in the evening watch the feet of their faithful to empower them to succeed in their ministry.

In a sermon, Most Revd. Alexander Ibezim who is also the Bishop of Awka Diocese spoke on the theme, ‘Preparation, Essential Ailments in Life’ which he said is important for a minister of God to align himself with preparation on how to direct souls God entrusted to their care.

He pointed out that preparation is a stem and pillar upon which they will stand to run their lives and how prepared they are, will determine if the sermon preached to the faithful impacts positively or negatively on them.

Most Reverend Ibezim urged them to be sober and vigilant to checkmate adversaries as was encountered in the life of biblical Judas Iscariot advising them not to be a tool Satan can use.

Prayers were offered by the ministers of God while their feet were watched and cleaned by Most Reverend Ibezim.