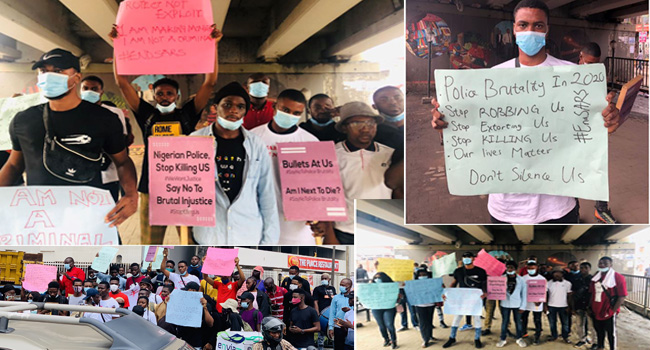 A group of young Nigerians has occupied the streets in Lagos to protest police brutality and demand an end to the Special Anti-Robbery Squad (SARS).

Using the hashtag #LagosProtests, the youths shared videos and photos of them gathered at Ikeja Underbridge.

The youths in a signed petition said despite several reforms announced by the Inspector General of Police, “cases of abuse of citizens by operatives of the Special Anit-Robbery Squad have increased without any steps taken by the high command of the Nigeria Police Force to address the fundamental problem of impunity of the Special Anti-Robbery Squad.”

They, therefore, demand the total disbandment of the Special Anti-Robbery Squad.

They plan to take the protest to Police Headquarters in Ikeja and to the Lagos State House of Assembly and continue for the next three days.

See the tweets containing videos and photos from the protest below…

Even if you are not here with us, just retweet and make a tweet with #EndSARSprotest and #LagosProtests

it’s time to put an end to this Menace called SARS #EndSARS pic.twitter.com/O8ceEFEQGs

Tweet with hashtag #LagosProtests let the government know that this time, WE ARE NOT JOKING.

We want SARS to end and we want it done TODAY!!! pic.twitter.com/zpEA3TqXhO