Every Journey and Mission has two most important moments defining its essence, The Beginning, and the End. The Second Glorious Edition of the Joshua Generation International Youth Conference has been set on track with an eventful Opening Ceremony. 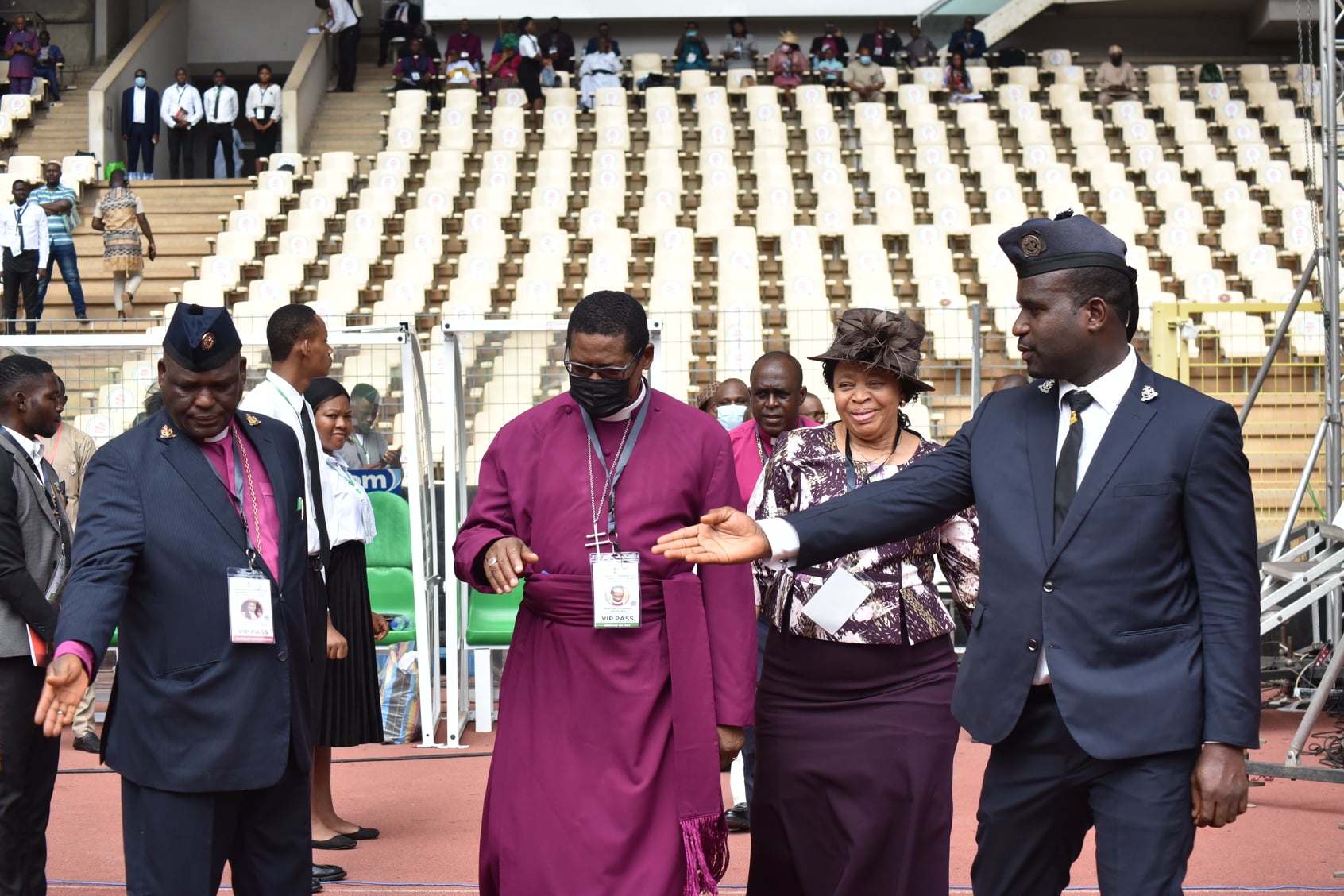 As it is custom in the Anglican Communion, the Primate was honored by the Boy’s Brigade of Nigeria who displayed their aesthetics.

The inspection of the Brigade Guards and Band Boys by the Primate assisted by Mama Nigeria, Mrs. Angela Ndukuba, and the Coordinating Bishop of the JGIYC, Rt Revd. Aloysius Agbo added some colors to the event. The Launching of the Conference was oiled and recharged by an Opening Prayer led by the Archbishop of Jos Province, Most Revd. Ibrahim Marcus.

A delightful ballet dance by a kid, Praise God from Sapele Diocese excited the cheering crowd which took the event to a heightened level.

Erstwhile Primate, Most Revd. Nicholas Okoh was invited for his message to which he congratulated the Primate on the success of the JGIYC. Most Revd. Nicholas Okon noted that JGIYC is “setting the youth on the path for spiritual, physical, and political progress. The credibility of the resource persons for this edition of JGIYC was also established by the immediate past Primate.

While charging the youth to be attentive during the conference, Most Revd. Okoh concluded by encouraging the participants to take something positive to their respective families, churches, and villages.

In a familiar succession picture, the message of the Primate, Metropolitan of the Church of Nigeria, Anglican Communion, Most Revd. Dr. Henry Ndukuba followed his predecessor. The youthful and spirited Primate, Most Revd. Henry Ndukuba lifted the spirit of the crowd with the song “To God is the Glory, Great things He hath done”.

His welcome address was read by him where he welcomed the Dignitaries led by the Secretary to the Government of Federation, Barr Boss Mustapha also including the Minister of Youth and Sports, Hon Sunday Dare represented by the Minister of State for Education, Hon Emeka Nwajiuba, Sen Frank Ibezim and the Former Minister of Information, Prof Jerry Gana with a mention of the present Bishops and Archbishops. The Primate concluded by expressing his delight with the presence of participants and charged them to learn from the sessions and impact others who are not available for the conference.

This was followed by other addresses by the Minister of Youth and Sports which were delivered by Hon Emeka Nwajiuba, the Minister of State for Education. He mentioned that he graduated from AYF with a Men’s fellowship. He added that Sunday Dare sent him a brief message that he should deliver his speech two days ago.

He sang the song “stand up, stand up for Jesus “. He said that’s the banner of Christ that we shall move from victory to victory

He talked about the Leakages between spirituality and Technology development, saying it’s the negative aspects of other cultures that promote immoral behavior attributed to lack of opportunities and employment.

He also talked about the Consumption of drugs and alcohol and sexual perversion. However, he submitted that it takes a village to raise a child, with Honesty, commitment, and consideration for others.

He pleaded that people with grievances with the Government should seek an amicable resolution. He concluded with Hymn 770 of our hymn book.

SGF, Boss Mustapha brought warm greetings and best wishes from President Muhamadu Buhari to the youth for their contribution to the National development. Mustapha commended the primate for initiating the vision of JGIYC, a gathering for fellowship, discipleship, and empowerment of the youth.

Talking about the theme harped for capturing the essence of gathering youths together towards orientation and transformation of their lives towards impacting the church and the society positively.

A new current realization ( not only priests are apostles of God ) that there is a consciousness that wherever self-conscious Christians in every aspect of service in positions of government that becomes their pulpit.

The focus -: The Market place Christina uses the business and economic development from more

The SGF quoted James Rooselvolt who described why business matters to God; Business exists in a society where people can express their God-given talent through meaningful and progressive work to offer goods and services.

Young Christians must use the platform given to them in their different endeavors to become absent of change.

Youth, women, and children have been at the receiving end of every moral decay that has led the world into various conflicts.

He continued by stating that 70% of the country’s population are youths, this underscores the need to develop youths that will develop business and politically with the fear of God and transparency.

The 4 ways Christians engage in the marketplace

– Sleepers (they believe they can’t change the marketplace)

– influencers ( they believe God cares about business, they succeed in business and ministry and lead people to God ), speak openly about their religion while others are skeptical of influencers.

– Leaders ( they change the spiritual landscape of all organizations), actions speak than voices, timing is perfect, and their impact is transformational.

He charged the JGIYC to promote the emergence of young men and women of virtue that will serve God with commitment.

He challenged youths to be courageous and emulate the above examples.

He charged youths to be involved in the upcoming General election.

Mustapha also quoted Peter Wangler about ‘how church and pastors leaders do not own businesses and authorities in the city’.

He charged the church to train the youths to take over the marketplace to win it for Christ and ensure social development.

The SGF revealed that he became a businessman by choice but became a politician by necessity. ‘I am a child of God and ordained’ he added.

He concluded by stating that the government will continue to create the enabling environment for progress in society. ‘I call on youths to avail yourselves those opportunities. ‘The admonition of Christ is to occupy and have dominion until he comes’. He added that Christians should contest and get elected to political offices so they can impact positively.