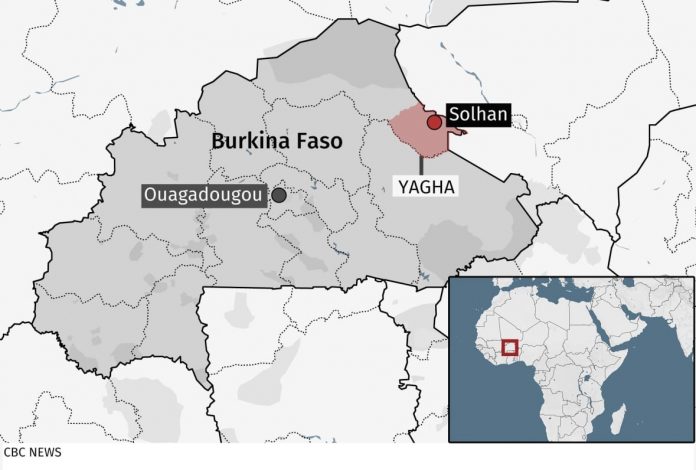 The BBC puts the death toll even higher at 160. Bodies were discovered in three mass graves. According to one report the dead included 20 children. It followed an attack on a nearby village on Friday which killed 14.

The government have declared three days of national mourning. They have blamed jihadists for the raid on Solhan village in the north at the weekend.

Jihadist violence is on the increase in the Sahel. Groups affiliated with Al Qaeda and Islamic State have been gaining ground in the region.

In parts of the north, Christians are the primary targets.

Over three months, Islamists killed 14 at a Catholic church, and burned a Protestant church, killing a further 24 worshippers, including a pastor.

They also killed five members of a church in Sebba, including the pastor, his son and two nephews. They spared only the pastor’s two daughters.

‘Our partners say the jihadists have been targeting pastors and priests, forcing churches to close their doors and meet in secret,’ says Release International CEO Paul Robinson.

‘During these attacks, the militants stop villagers and demand to know their religion. Any who say they are Christian are killed immediately, while those of other faiths are allowed to return home unharmed.’

According to the US State Department, jihadist attacks range from bombings, killings, kidnappings and school burnings to assaults on places of worship and religious leaders.

But Christians are not the only target. The jihadists also want to purge Islam of what they regard as compromise. In Burkina Faso, the militants are attacking Muslim imams who oppose their beliefs. And in areas under their control in Mali they have imposed a harsh version of Sharia (Islamic law).

‘Susanna’ is a partner of Release International, with Voice of the Martyrs Poland. In recent years, she has witnessed the rapid deterioration of the country and the impact on Christians there.

‘Burkina Faso was beautiful and peaceful,’ she says, ‘but now everything is lost.

‘Christians, animists and Muslims were living in relative peace, but the situation started to change with the rise of Islamist militants linked to ISIS and al-Qaeda.’

To begin with, she says, the insecurity affected everyone equally. ‘Then in April 2019, the jihadists announced they would focus on Christians.’

Most of Burkina Faso’s Christians live in the south, but the minority in the north soon found themselves targeted by the jihadists from Mali.

Susanna says: ‘They want to kick out the Christians. Christians are on the blacklist. The jihadists come looking for Christians to kidnap or kill them.’

As a result, many have fled, swelling the numbers of refugees.

‘The situation facing Christians in Burkina Faso is now similar to Nigeria,’ she believes. There, attacks against Christians in the north and Middle Belts are a daily occurrence.

And just as in Nigeria, the jihadists have attacked schools to try to purge the western influence from their culture. They have burned schools down and forced 2,000 to close, denying 300,000 pupils an education.

‘Children have seen their teachers beaten and killed,’ says Susanna. ‘I can’t imagine what it must be like to be a small child and to witness such horrific things.’

Ten-year-old Philip was snatched to safety by his mother and father when they spotted jihadists heading towards their village. His mother ‘Halima’ and father ‘Daniel’, a pastor, rounded up their six children and fled.

But Daniel soon realised there was not enough food for his family. He would have to risk going home to get supplies. He returned with ten-year-old Philip, hoping the jihadists had moved on. But he was wrong. As they got closer the jihadists saw them.

Says Susanna: ‘When Pastor Daniel realized there was no possibility of sneaking away he told his son, “Go away and tell your mother that I am going to meet Jesus today.”’

Philip was able to escape, but not before seeing the group of 40 jihadists surround his father, stab him and shoot him.

Release International’s partners have been providing food for the family. Daniel’s widow, Halima, says: ‘Please pray for me and my children so we may continue to believe and have strength.’

Food distribution has played an important part in helping displaced Christians to survive, especially during the pandemic. Partners of Release International have provided food and hygiene supplies for more than 8,000 Christians. They have also been drilling wells for drinking water.

But the children still need to be educated, which the militants are determined to stop. Some of these children have been driven out of their schools by Covid and conflict for up to three years.

Release partners have paid for school fees and school kits for 440 children of Christians displaced by conflict.

‘It’s a start,’ says Release CEO Paul Robinson. ‘But we need your prayers. In Burkina Faso there are now a million displaced people. Please pray for those who have lost loved ones, and for the Christians there to be a light to others in this horrific situation and to work to bring change.’

Until 1960, landlocked Burkina Faso was the French colony Upper Volta. More than 60 per cent of the population is Muslim. Almost a quarter are Roman Catholic, while Protestants make up 6.5 per cent, some say less. Two-thirds are illiterate and unemployment is widespread.

Poverty, joblessness and lack of education are often seen as conditions that could lead to unrest. According to the Global Terrorism Index (GTI) seven of the ten countries with the largest increase in terrorism in 2020 were in sub-Saharan Africa. Burkina Faso ranks 12th, just behind Mali.

Before 2015 conflict would have seemed unthinkable. Until then, Muslims, Christians and animists lived together in peace in Burkina Faso, whose name means ‘Land of incorruptible people’.

The rot set in in 2015, when jihadists from neighbouring Mali headed south. Groups affiliated to Al Qaeda and Islamic State stepped up their assaults the following year. According to news reports, Burkina Faso has endured almost daily attacks. By 2020 militants had killed almost 4,000 Burkinabés.

The UNHCR has recorded more than a million refugees. These are mainly women and children, fleeing ‘attacks by armed groups against security forces, and the kidnappings and killings of civilians and religious representatives’.

Aid agencies warn of a humanitarian crisis. According to Save the Children a third of all children under five in Burkina Faso are now malnourished.

What began in the Middle East is spreading. Today Africa has become the prize for violent jihadists set to impose their firebrand version of Islam on the world.

The Global Terrorism Index confirms the jihadist centre of gravity is shifting from the Middle East to Africa. The number of killings by IS terrorists in sub-Saharan Africa rose by 67 per cent in a year.

And according to the Washington-based Center for National Interest: ‘The epicenter [for jihadism] has moved westward to places like Syria and into the African Sahel… Various jihadist factions have set Mali, Burkina Faso, Niger, Chad, Nigeria, Somalia and Mozambique ablaze.’

The International Crisis Group believes: ‘The country is locked in a perilous downward spiral.’

The fear is that others may go down with it.

In the words of risk consultancy GlobalStrat: ‘Africa is going to be the battleground of jihad for the next 20 years, and it’s going to replace the Middle East.’

Through its international network of missions, Release International is active in some 25 countries around the world, supporting pastors, Christian prisoners and their families; supplying Christian literature and Bibles, and working for justice.