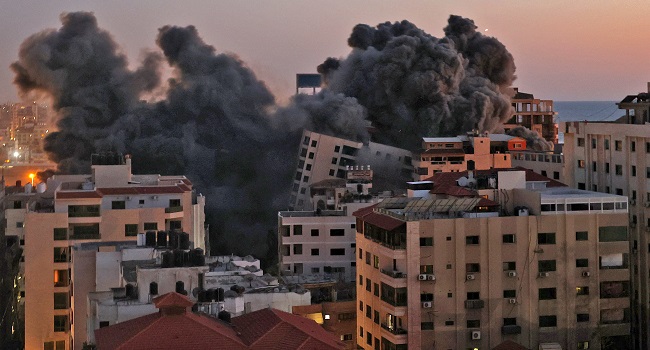 On the sixth day since the conflict escalated, the death toll rose and violence also swept the occupied West Bank as a US envoy prepared to hold talks with officials seeking a de-escalation.

Despite intensifying diplomatic efforts, Israel’s fighter jets struck several sites in the densely-populated Gaza Strip which it has blockaded for more than a decade, while Palestinian Islamists unleashed rockets again towards Israel, killing one.

Balls of flame reached high into the sky as Israel’s air force on Saturday afternoon flattened a 13-floor building housing Qatar-based Al Jazeera television and the Associated Press news agency in the Gaza Strip, after giving a warning to evacuate.

“Clearly there is a decision not only to sow destruction and killing, but also to silence those who broadcast it,” Walid al-Omari, Al Jazeera head for Israel and the occupied territories, told AFP.

Jawad Mehdi, the owner of the Jala Tower, said an Israeli intelligence officer warned him he had just one hour to ensure the evacuation of the building.

Israel claimed that “military intelligence” of Hamas, the Gaza Strip’s Islamist rulers, were also in the building.

Earlier, an Israeli strike on a three-storey building in the Shati refugee camp killed 10 members of an extended family — two related mothers and their four children each. Israel’s army said the building was used by “Hamas terror organisation senior officials”.

Mohammed al-Hadidi said he had lost most of his family in an air strike in Gaza.

“What did they do to deserve this? We’re civilians,” said the devastated father, whose surviving five-month-old baby was wounded in the explosion.

“They are striking our children — children — without previous warning”.

Israeli air and artillery strikes on Gaza since Monday have killed 139 people including 39 children, and wounded 1,000 more, health officials say.

Palestinian armed groups have fired 2,300 rockets at Israel, killing 10 people, including a child and a soldier. Over 560 Israelis have been wounded.

On Saturday afternoon, a rocket fired from Gaza killed an Israeli man in the central town of Ramat Gen near Tel Aviv, police and medics said.

Violence also raged in the West Bank and there were fears of an escalation as Palestinians Saturday mark the Nakba, the “catastrophe” of Israel’s creation in 1948, which turned hundreds of thousands into refugees.

A Palestinian security source said the fighting was the “most intense” since the second intifada, or uprising, that began in 2000.

– ‘Sustainable calm’ –
US Secretary for Israel-Palestinian Affairs Hady Amr was to hold talks Sunday with Israeli leaders ahead of meeting Palestinian officials.

Washington has been criticised for not doing more to end the intensifying violence, after it blocked a UN Security Council meeting scheduled for Friday.

Israel, which is also trying to contain an outbreak of internal Jewish-Arab violence, is facing its bloodiest conflict with Palestinian militants in Gaza since 2014.

Its bombardment began Monday, after Hamas fired rockets towards Jerusalem following bloody Israeli police action at the flashpoint Al-Aqsa mosque compound, and a crackdown on protests against the planned Israeli expulsion of Palestinians from their homes in the Sheikh Jarrah neighbourhood in annexed east Jerusalem.

From 7:00 pm Friday to 7:00 am Saturday, some 200 rockets were fired at southern Israel, the Israeli army said. Over 100 were intercepted by air defences.

Some 10,000 Gazans have fled homes near the Israeli border for fear of a ground offensive, the United Nations said.

“They are sheltering in schools, mosques and other places during a global Covid-19 pandemic with limited access to water, food, hygiene and health services, said UN humanitarian coordinator for the occupied territories, Lynn Hastings.

Kamal al-Haddad, who fled with his family to a UN-supported school in Gaza City, said: “All the children are afraid, and we are afraid for the children”.

Egypt opened its Rafah border crossing with Gaza on Saturday to allow in 10 ambulances to ferry out seriously wounded Palestinians for treatment, medical officials said.

‘Mob Attacks Not over yet’
Within Israel, tensions have spiralled into mob violence in mixed towns that are both home to Jewish Israelis and Arab citizens of Palestinian descent.

More than 750 people have been arrested in mixed Jewish-Arab towns this week, police said, including dozens of Arab Israelis were arrested overnight.

In the north, where Israel remains technically at war with neighbouring Lebanon and Syria, tensions were also rising.

Three rockets were launched from Syria Friday, while Israel’s army said it fired “warning shots” towards a group to stop them crossing from Lebanon with Israel’s arch-enemy Hezbollah saying one of its members was killed.

The UN said the Security Council was set to meet Sunday to address the violence.

But Israel’s Prime Minister Benjamin Netanyahu gave no indication that Israel was ready to ease its campaign.

“I said we’d deliver heavy blows to Hamas and other terror groups, and we’re doing that,” Netanyahu said. “It’s not over yet”.