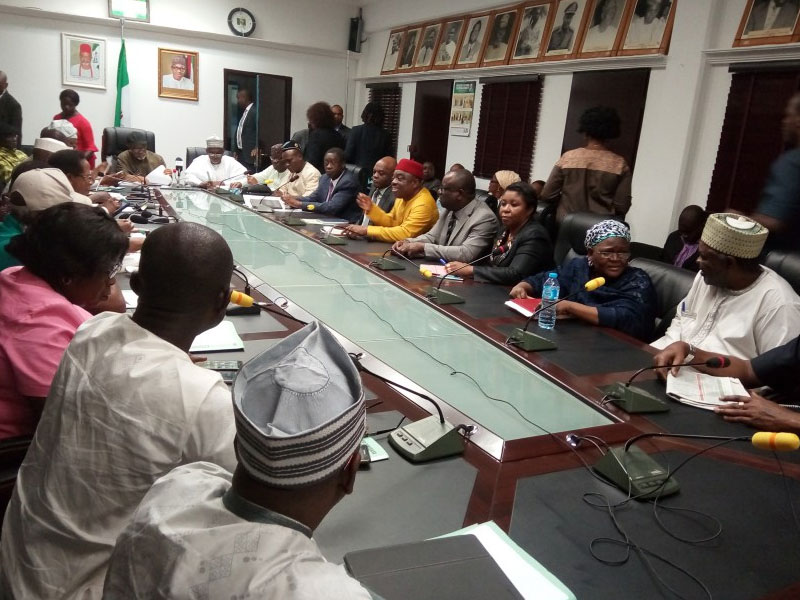 Strong indications emerged at the weekend that the federal government and the Academic Staff Union of Universities (ASUU) will soon resume negotiations to end the four-month strike by lecturers.

Our correspondent’s investigations revealed that both sides are making moves to restart discussions that were abandoned following the disagreement over the introduction of the Integrated Payroll and Personnel and Information System (IPPIS) in the university system and subsequent stoppage of salaries of non-compliant ASUU members.

ASUU has also said its alternative payment platform, University Transparency and Accountability Solution (UTAS), was ready for verification and validation by agencies of the federal government.

While the ASUU President, Prof. Biodun Ogunyemi, told nesmen at the weekend that the union had met with the Minister of Education, Mallam Adamu Adamu, to help facilitate resumption of talks with the federal government on the lecturers’ grievances, the Minister of Labour and Employment, Dr. Chris Ngige, also confirmed to newsmen that he was set to invite the union to resume talks.

Ogunyemi said ASUU was ready to resume negotiations but an invitation had not been extended to it.

The ASUU president listed the five outstanding issues as “provision of funds for the revitalisation of the universities, conclusion of renegotiation of 2009 agreement with regard to the conditions of service of our members, the issue of Earned Academic Allowances (EAA) that the federal government promised to start paying as from November last year, the issue of visitation panel to federal universities, which we have been talking about for three-four years now and finally the issue of proliferation of universities in the country, especially the universities by state governments.”

Reacting to a question on whether the union will suspend the strike to allow universities to reopen, Ogunyemi said: “We believe that if the federal government is sincere, our members would be willing to go back to work as soon we resolve these outstanding issues.

“What we need is the sincerity of purpose; we had a framework that we were using to engage all of these issues what we call the Memorandum of Action of February 7, 2019. So, the government can go back to the framework. That framework provides timelines for the implementation of agreements reached. “When we say memorandum of action, every item has a timeline; so we want the government to demonstrate good faith and our members will go back to work.

“Those aspects of the timelines that ought to have been met should be met. Let the other timelines contained in the 2019 agreement be revalidated.”

For instance, Ogunyemi said the federal government promised to pay the outstanding balance of the Earned Academic Allowances up to 2018 starting from November last year.

He said under the implementation timeline agreed on in February last year, the government promised to pay the EAA in four installments beginning with the first batch being in November 2019 but failed to do so.

“We are approaching another November, one year after and no kobo has been paid,” he added.

On the dispute over IPPIS, Ogunyemi said that ASUU’s alternative platform, University Transparency and Accountability System (UTAS), was ready.

According to him, ASUU will soon submit the platform to the Ministry of Education and other agencies to test run.

“We are telling the government now that ASUU is ready for demonstration. We shall soon unveil our platform but part of the requirements for final adoption is that it must be surrendered to the Nigeria Information Technology Development Agency (NITDA) for validation and that will also take sometimes. So, we are going to make it available to them for validation. But before that, we will do a demonstration for the Federal Ministry of Education to show how the platform operates and its advantages over IPPIS,” he said.

Before the lockdown to combat COVID-19 pandemic, that led to the closure of all schools nationwide, ASUU had declared an indefinite strike to protest the stoppage of their salaries and the order for the enrolment of its members into the IPPIS.