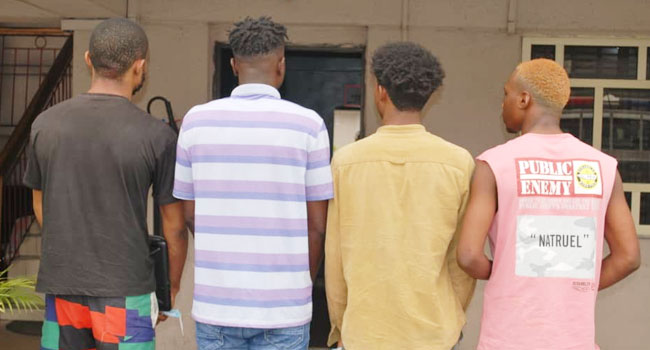 EFCC’s Head of Media and Publicity, Dele Oyewale, who disclosed this in a statement on Thursday said that the suspects were arrested by operatives attached to the Port Harcourt Zonal Office of the agency.

He explained that they were apprehended on Thursday during a raid on their hideout on Chibiak Avenue, Elenpranwo, Ada George in Port Harcourt.

The suspects, said to be students of the University of Port Harcourt, allegedly defrauded 15 victims of $111,500.

At the point of their arrest, the following items were recovered: one Tecno Spark 4, one Iphone 11 Pro Max, two Infinix Hot, one apple Laptop, one Iphone 7 and two Iphone 11, one iphone 8+, one Acer Laptop and one HP Laptop.

EFCC explained that preliminary investigation established that the suspects are majorly involved in a romance scam and also act as pickers for organized ring of fraudsters.

Oyewale noted that Prince Hyacinth parades himself as a Spain-based marine engineer to bait his victims, Rex Emadifie Oghene poses as a rig engineer based in the United State.

The two other suspects, Odili Ifeayi and Uduak Samuel Williams were said to have presented themselves as rig/marine engineers to defraud their victims.

He added that they would be charged to court as soon as investigations were concluded.