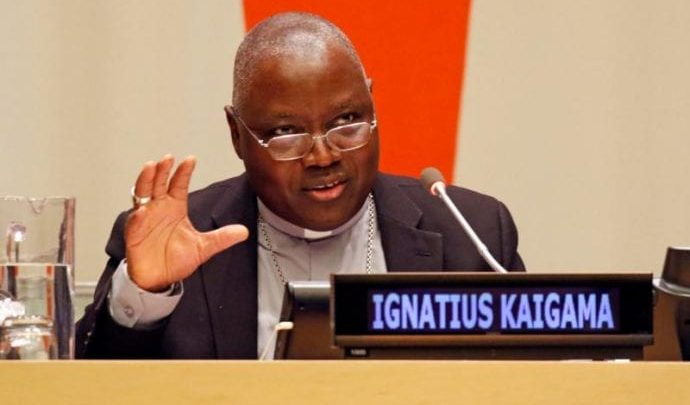 It has come to the notice of the Department of the Social Communications of the Archdiocese of Abuja as false news which has gone viral on the endorsement of Kashim Shettima as the APC Vice Presidential candidate.

This fake news is coming after the nationwide outcry that graced the Muslim-Muslim ticket of the ruling All Progressives Congress (APC) since Bola Ahmed Tinubu’s announced the former Governor of Borno, Senator Kashim Shettima as his running mate in the 2023 presidential election, the loyalists of the ruling party have been at their wits end explaining to Nigerians the soundness of their choice.

One of their antics to give credit to the much-criticized choice has been to use the good names of reputable Nigerians to launder the image of Shettima. One of such futile attempts is dragging the name of Most Rev Ignatius Kaigama, the Catholic Archbishop of Abuja, into the fan base of APC. Recently, social media was agog with the skewed news of such spurious endorsements.

To set the records right, at no point has the venerable archbishop either in his personal capacity or as the Metropolitan of Abuja Ecclesiastical Province made such comments. Those familiar with the norms of the Catholic Church understand that Canon 285 § 2 admonishes that “Clerics are to avoid those things which, although not unbecoming, are nevertheless foreign to the clerical state.”

Endorsing a candidate of a particular party by any cleric as purported is certainly foreign to the clerical state and not a possible action by a Catholic cleric. It is therefore unthinkable that Archbishop Kaigama who knows better the workings of the Church as a top cleric in the Nigerian sphere would make such an alleged endorsement. How could he when such posture contradicts the very essence of his episcopal ministry?

The rumor peddlers depict that they are out of touch with ecclesiastical reality in Nigeria. Archbishop Kaigama ended his tenure as President of the Catholic Bishops Conference of Nigeria (CBCN) in 2018. After him, there have been two successors, yet the bearers of the false news presented him now in 2022 as the President of CBCN, which he longer is.

The bigger question to be asked is: How did we come about such a nasty insinuation? Why the futile attempt to put words in the mouth of the Archbishop?

Well, it has to do with the event of 2016. As the then President of CBCN, Archbishop Kaigama along with other bishops, graced the Golden Jubilee of the Catholic Diocese of Maiduguri while Kashim Ibrahim Shettima was the Governor of Borno State.

As it was customary, he led the bishops to pay a courtesy visit to then Governor Shettima. Archbishop Kaigama minced no words in reminding his listeners that the Catholic Bishops of Nigeria have a prophetic voice. His words: “We are a voice for the people. Our voice is a prophetic voice. We see things where things are good, we say it so. Where things are bad, we say it so.”

Coming from such a premise, he of course commended some virtues he found in the governor as it relates to his working relationship with peoples of other faith. Six years after however, it is surprising that his innocuous comment has been reinvented by mischievous makers to mean endorsement of Shettima as Tinubu’s vice presidential candidate, what a shame!

The general public is hereby notified that Archbishop Kaigama has not and will not endorse any candidate as his flock cut across political parties and he would not prefer one candidate above the other. It is up to Nigerian voters to make their choice through the ballot box by selecting the best candidates.