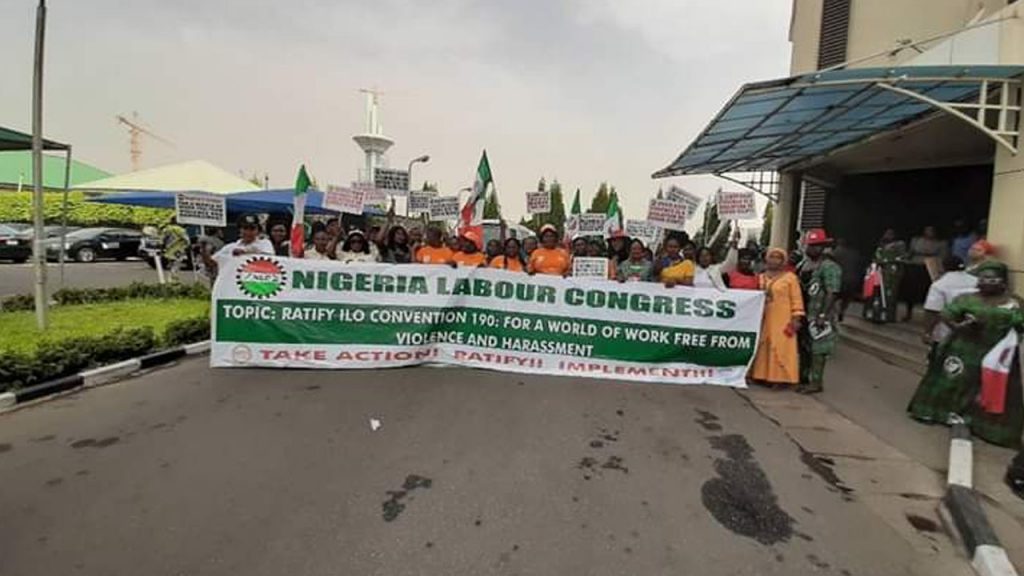 The Nigerian Labour Congress (NLC), has appealed to government at all levels to make the welfare of workers a priority to cushion the hardship occasioned by the coronavirus lockdown.

Mr Leonard Nkah, Ebonyi NLC Chairman, made the appeal in Abakaliki on Friday in a message to workers in the state.

According to him, prioritising welfare of workers will enhance their living standards and support their families at this period of social and economic stress caused by COVID-19 pandemic.

He said that timely payment of salaries, remunerations and other palliatives would serve as boosts to enable them to observe all precautionary guidelines, regulations and directives that would make them stay safe from the scourge.

He said: “I appeal to the governments at all levels to kindly attend to the worker’s needs as a matter of urgency.

” Let them pay salaries and remunerations with every other package as palliative to the workers and the people to help them observe the guidelines such as the lockdown, sit-at-home directive, use of face masks and regular hand washing.

“As a leader who feels the pulse of the people, I can state unequivocally that workers are hungry and in dire need of food.

“That, it is only the provisions of food and welfare packages and the availability of such will help both the workers and the government achieve a successful fight against the pandemic and win this war threatening our health and life.”

Nkah urged workers to be resilient in the face of the pandemic, appealing to them to partner government and other non-state actors in the fight against the deadly virus.

“All hands must be on deck and no one should feel less concerned as injury to one, is an injury to all.

“Even if you don’t have any other thing to contribute, I want you to be all out in enlightenment campaigns to help those who don’t really understand what we are facing to really understand and comply with every regulation, ” he said.

The labour leader described the 2020 Workers’ Day as ‘unique’ because it was devoid of its usual fanfare and celebration due to the lockdown brought by the novel coronavirus.

He said: “It is with a heart full of burden that I write this message which is unlike any other I’ve ever delivered as a labour leader or experienced in our history.

“This year’s May Day is undoubted without the normal gatherings, protocols and procedures worldwide and even the blind knows why.

“The global health pandemic of the novel coronavirus has not only changed the world and everything in it as we have known it, but it also threatens to make a quick and abrupt end of both people and labour.

“Economies are crashing like a pack of cards with reckless abandon and the rulers of nations are helplessly powerless in the face of an unseen killer agent; the enemy that will destroy everything if not properly tackled, arrested and curbed.

“It would’ve been unimaginable and indeed unbelievable that such a day will come when establishments, companies and factories will shut, shops and offices shut, even religious gatherings banned and movements restricted.

“We are not in a war as we’ve known wars to be; nation against nation, but yet we are in a war situation, more terrible than the conventional wars.

“Prevention is far better than cure and we have to preserve ourselves and people from getting infected by this deadly virus which has claimed almost 300,000 lives; infected and threatening to take more than three million human lives globally.

“All across the world, the pandemic is raging and leaving a deathly trail of death more than any Tsunami or human disaster ever known.

” But God is our refuge and in Him we trust; we need not be filled with fear and trepidation as if we have no hope, we only need to be prayerful and united in our resolve to adhere to the laid down rules of hygienic practices and social distancing coupled with healthy living.

“I assure you, the great Nigerian workers that we all shall see the end of this virus and celebrate our victory over it.

“There is hope and you and I have to be our brother’s keepers.

” Share love; share care, share provisions in whatever way you can and share health and life and work together with the government and other well-meaning organisations in every good and positive enterprise towards victory.”

He applauded to Gov. Dave Umahi and other state players in their efforts to curb the spread of the virus.

Some of the workers, Mr Sunday Ayigor, Stephen Onwe and Mrs Loveth Elom, who spoke to the News Agency of Nigeria (NAN), urged the government to revisit the minimum wage and salary adjustment paid to Ebonyi workers which they alleged were the least in the federation.

The workers who lauded Umahi for the giant strides made in physical infrastructure urged him to prioritise workers’ welfare and social benefits to boost their morale.

“No promotion benefits for workers in the state government’s payroll and we receive the least minimum wage and salary adjustment in Nigeria and this is affecting the productivity of the workers and their living standards,” they said.