I Wonder How Boko Haram Survived Up Till This Time – Buhari

President Muhammadu Buhari says he is surprised that Boko Hara has continued to launch attacks on communities despite the huge budgets expended on the counter-insurgency operations in the North-East.

The President stated this when he paid a condolence visit to the Shehu of Borno, Alhaji Abubakar El-Kanemi, in Maiduguri following recent attacks by Boko Haram which claimed many lives at Auno in Konduga Local Government Area of Borno State.

He stated that the fight against insurgency could not be executed without good intelligence and support of the people. 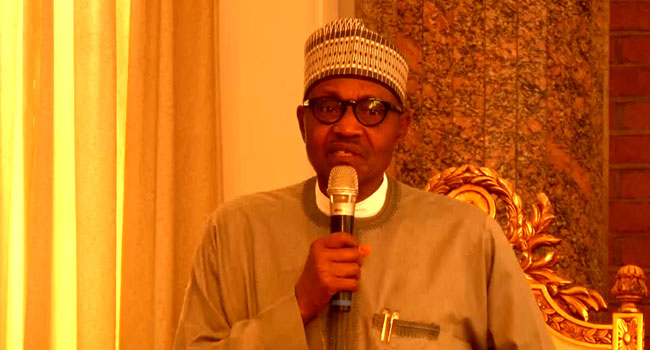 According to the President, operations against the insurgents will not be successful if the people do not cooperate with the military and other security agencies.

“With my understanding of our culture, I wonder how Boko Haram survives up to this end.

“As the Commander-in-Chief of the Armed Forces, I campaigned in 2015 and last year on three fundamental issues which include security – you cannot preside over an institution or a country if it is not secured.

“This is just common sense, everybody knows this, even those that have not gone to school know this. As Commander-in-Chief, I am dealing with the security institutions and I believe there is an improvement in security.

“I urge the people of the state to cooperate with the law enforcement agencies; let us deny Boko Haram access to our loyal citizens and encourage displaced people to go back to their land,” the President stated.

Reacting, Governor Zulum thanked the President for identifying with the state and commended the efforts of the military so far.

He asked the military to borrow from their successes, especially between 2015 – 2017 and take the battle to the insurgents and push them to the fringes of Lake Chad.

The governor also urged the security agencies to be patient with the civilian populace and give opportunities to the Internally Displaced Persons to access their communities.

On Sunday, the terrorists attacked Auno community, killed dozens of stranded passengers, destroying houses and 18 vehicles as well as other valuables.