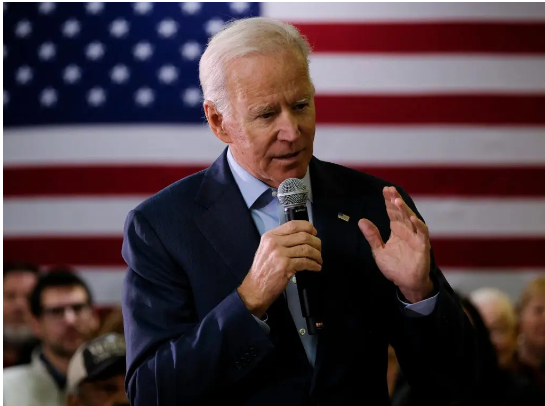 Democratic presidential aspirant, Joe Biden, has lashed out at the United State’s President, Donald Trump, calling the US President a “fool” for appearing to make fun of him (Biden) wearing a face mask.

The Democratic hopeful has been kept at his Delaware home because of the COVID-19 pandemic that has frozen the presidential campaign but appeared at Memorial Day on Monday with Jill, his wife all wearing blackface masks.

That was his first public appearance in more than two months.

Trump later retweeted a post that appeared to make fun of a photo of Biden and his wife in their black masks.

The US leader later said he did not mean to be critical of the Democratic presidential hopeful.

But in an interview with CNN on Tuesday, Biden responded, “He [Trump] is a fool, an absolute fool, to talk that way. He’s supposed to lead by example.”

Speaking further, the former Vice President noted that nearly 100,000 US citizens have died from the dreaded virus and suggested that as many as half of those deaths were avoidable but for Trump’s “lack of attention and ego.”

Trump has refused to wear a mask despite medical advice and polls finding reveals that conservative Americans are more likely to follow their President’s footsteps.

Biden, who did not wear a mask during the interview CNN, conducted outside his house, but sat 12 feet (3.6 meters) from the reporter, added, “It’s just absolutely this macho stuff,” Biden said of Trump.

Adding that Trump is being, “falsely masculine,” and “It costs people’s lives.”

He said Trump is politicizing the issue of mask-wearing and “it’s stoking deaths. That’s not going to increase the likelihood that people are going to be better off.”

Recall that after Biden wore the mask on Memorial Day, Trump retweeted a post by a political commentator that featured an image of a masked Biden and his wife over the comment, “This might help explain why Trump doesn’t like to wear a mask in public.”

Asked about that during a subsequent event in the White House Rose Garden, the president responded, “Biden can wear a mask.”

Trump explained that Biden was standing outside with his wife and did not need to wear a face mask at that point.

“They’re inside, they don’t wear masks and so I thought it was very unusual that he had one on. But I thought that was fine. I wasn’t criticizing him at all. Why would I ever do a thing like that?”