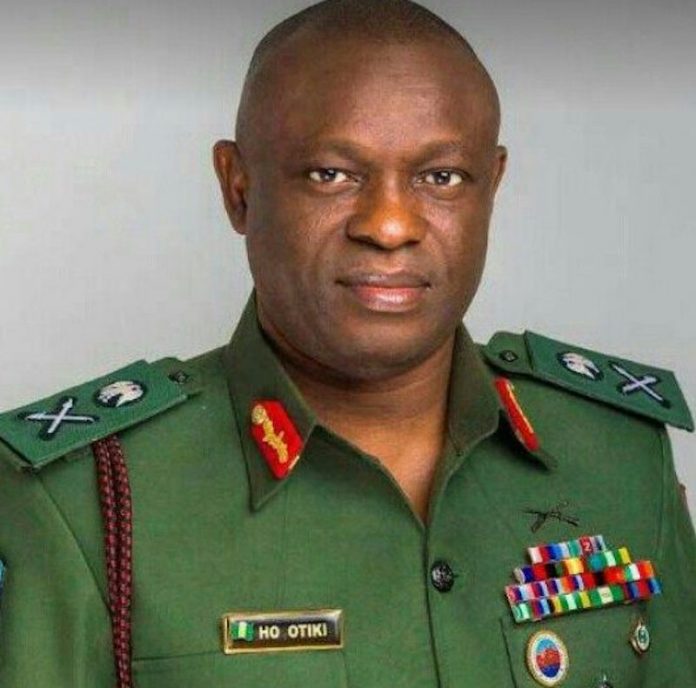 The Court headed by the Army Chief of Policy and Plans, Lt. Gen Lamidi Adeosun, found Major General Otiki guilty of disobedience to service orders, theft of public property, among others.
Consequently, the court pronounced his dismissal from service with disgrace and dishonour, reduction in rank from Major General to Brigadier-General, and severe reprimand.
The sentences are subject to the confirmation of the Army Council.

The military court also ordered that all monies totalling N135.8million, $6,600 recovered by the Special Investigation Bureau be returned to the coffers of the Nigerian Army.

It further ordered that another N150million stolen money which could not be accounted for should also be returned to the coffers of the Nigerian Army.

The former GOC was charged for stealing N100 million and N160 million, respectively belonging to the Nigerian army in count one and two and disobedience to standing order under section 66 of the Armed Forces Act(AFA), on count there, four and five respectively.

The Court which started at exactly 7:55 Monday night and held at the army headquarters Command Officers’ Mess, Asokoro, pronounced the judgement at exactly 23:13 hours.

In his final submission, the lead counsel for Major General Otiki, Barr. Israel Olorundare (SAN), pleaded for clemency and urged the General Court Martial to temper justice with mercy.
He reminded the court that General Otiki in all his years in the Army leading to the trial was a very loyal and disciplined officer, well mannered and a good manager of resources which was attested to by Col Nuhu Mohammed, Deputy Director, Records in the office of the Military Secretary, Army, who read his resume.

The senior advocate also reminded the court that General Otiki was the officer who facilitated and obtained the NNPC licence for the Nigerian Army and assisted greatly in helping to tackle criminality in Lagos area during his time in charge of Operation Mesa.

On the various counts, the Senior Advocate said, in Count1, the accused senior officer returned the sum of N100million to the authorities which was stolen by the soldiers detailed to escort the money to Kaduna.

On Count 2, he said it was proved that some of the projects for which the sum of N150million was released to the accused senior officer were either completed or are ongoing and workers are still on site.

Furthermore, he urged the court to consider that the accused senior officer who was very sick, was also due for retirement this year.
Besides, he said, his wife had cancer and his mother died on the same July 2019 that soldiers taking the money to Kaduna stole the money.

The counsel further reminded the court that Gen Otiki was the breadwinner of his family.
“A career built for 45 years is coming to an end on a very sad note”, he lamented.

After the court pronouncements and sentences, the Senior Advocate said the defence would make a representation to the appropriate convening authority to note that General Otiki was not the one that stole the money and he was the one who reported the incident

“Aside this, he still sourced for the money and returned it to the authorities. So there is really need to take another look at the judgment”, he argued.