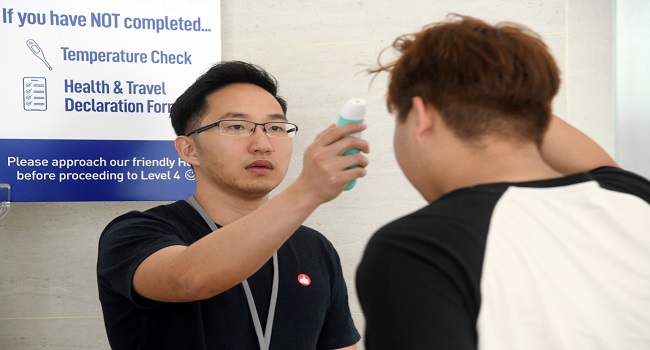 A Chinese man infected with coronavirus and his wife have been charged in Singapore for lying to health authorities investigating whether they had passed the illness to others, officials said Wednesday.

Singapore has recorded nearly 100 cases of the COVID-19 infection since the illness first originated in the Chinese city of Wuhan last December.

With nearly 2,800 confirmed deaths and more than 81,000 cases worldwide, Singapore has banned the entry of visitors who have travelled through China or parts of South Korea within two weeks of their arrival.

Hu Jun, originally from Wuhan, arrived in Singapore on January 22 and later tested positive for the illness. The 38-year-old has since recovered and been discharged from hospital.

His Chinese wife, a resident of the city-state, was issued a quarantine order.

Singapore’s health ministry said the couple “had given false information… about their movements and whereabouts” to officials investigating whether they could have passed the infection on to others.

They were charged because of the potentially serious risk their actions had posed to public health, the ministry added.

The pair face a fine of up to US$7,150 and six-month imprisonment if convicted.

Retracing the movements of those infected with the virus is crucial in tracking down individuals who may have been exposed, and prevent further spread.

In a separate case, immigration officials said Wednesday it had withdrawn an unnamed foreigner’s permanent resident status for violating an order to stay at home in self-quarantine after his recent travel to China.