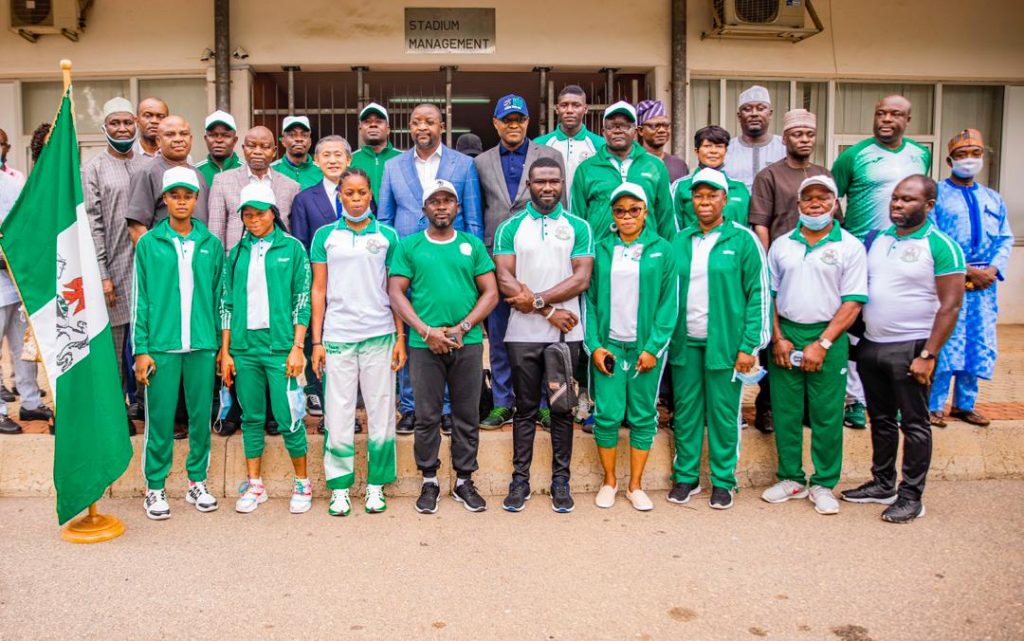 The President, Muhammadu Buhari, will on Monday host members of Team Nigeria to the Tokyo Olympics at the Presidential Villa before the final batch of the contingent departs for the Games.

Minister of Youth and Sports Development, Sunday Dare, disclosed this on Tuesday in Abuja at a brief send-forth ceremony for the first batch of the team which left for Japan.

He said the contingent which would leave in four batches would be formally “sent forth” by the President on Monday as is the tradition.

The minister explained that the ceremony would also afford the President the opportunity of officially handing over Team Nigeria to the Nigeria Olympic Committee in line with age-long tradition.

He added that President Buhari would also be unveiling the official Team Nigeria uniform to the Games.

“We are keeping to the tradition of unveiling the team to the President who will, in turn, hand them over to the NOC.

“The unveiling of the official wear/equipment will also be done by Mr. President. This is a very symbolic event meant to officially send forth the team to the Games.

“This should also inspire the athletes and reinforce the fact that the Federal Government and the entire country are behind them,” Dare said.

The minister also commended the President for the enormous support and resources in preparing and ensuring the athletes do well at the Games.

The News Agency of Nigeria reports that Team Nigeria, comprising of 58 athletes and 22 coaches, will compete in nine sports at the Tokyo Olympics.

NAN reports also that the first batch of Team Nigeria comprising athletes, coaches and other officials in canoeing, rowing and table tennis departed Abuja for Japan on Tuesday.

The second batch comprising those in athletics, taekwondo and wrestling will depart on July 13.

The third batch is those in gymnastics and badminton and will leave on July 17.

The last batch comprising members of the male and female basketball teams will depart on July 19.