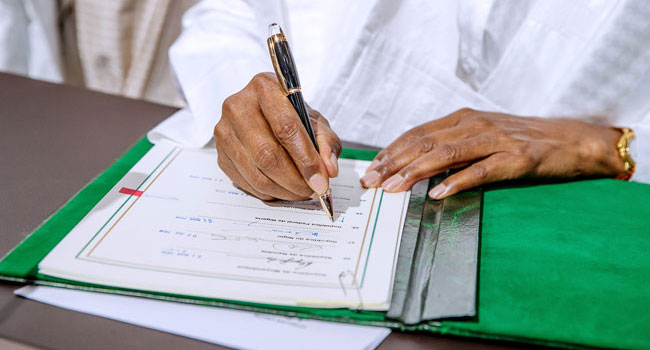 The National Assembly in June passed an increased budget for 2020 as Nigeria tackles the new coronavirus pandemic and a sharp fall in the price of oil – Nigeria’s biggest source of revenue from export.

The budget, which was proposed by the federal government sought to reduce Nigeria’s 2020 budget from N10.6 trillion to N10.5 trillion, was, however, increased by the lawmakers.

The budget was increased to N10.8 billion, higher than the initial approved budget in December 2019.

The review of the budget was necessitated by the impact of the COVID-19 which has adversely affected the oil price and, by extension, the revenue projections of the government.

From the revised budget, N422 billion was earmarked for statutory transfers, while N4.9 trillion was for recurrent expenditure.

Capital expenditure will take N2.4 trillion and N2.9 trillion, about a quarter of the budget, will be used to service debt.

N500 billion was earmarked as intervention funds for the fight against COVID-19, while the health sector got N186 billion allocation.

The budget assumes oil production at 1.9 million barrels per day (bpd). Oil prices have recovered from a 20-year low of just under $16 per barrel hit in March.

However, Nigeria has also agreed to limit its oil output to 1.412 million bpd as part of a deal with the Organization of the Petroleum Exporting Countries and other producers. That agreement was extended through the end of July.