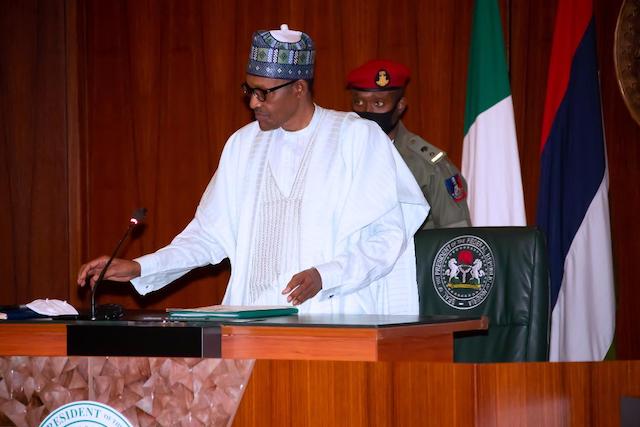 President Muhammadu Buhari has performed the virtual ground-breaking ceremony of three projects in the South-South region.

He said the rehabilitation of the Port Harcourt–Maiduguri railway would reactivate economic activities along the Eastern corridor, which have been greatly affected by insecurity.

The President said the country’s aspiration for nationwide transport infrastructure and railways would be significantly enhanced by these three projects conceived to be integrated in their operations.

‘‘The connection of the railway to a new seaport in Bonny Island and Railway Industrial Park, Port Harcourt is designed to increase the viability and boost trans-shipment of cargo and freight locally, across the West African sub-region and in the Continental Free Trade Area.

‘‘The sum of the socio-economic and environmental benefits of these projects includes creation of massive employment locally.

‘‘In addition, there will be further utilization of local contents and technology transfer, increase in internally generated revenue and would serve as a fulcrum for the achievement of the Federal Government planned Integrated Development Masterplan,’’ he said.

Urging all Nigerians especially industrialists, manufacturers and businesses within the zones to take maximum advantage of this infrastructure in planning for expansion and building new factories, President Buhari said the projects when completed would raise Nigeria’s economy to the global stage while reaffirming its leading role in Africa.

The President explained that the Port Harcourt to Maiduguri railway reconstruction project with new branch lines to Owerri, Imo State and Damaturu, Yobe State would resuscitate the once vibrant railway transportation in the Eastern railway corridor of the country.

‘‘We are further expanding it to achieve contemporary demand for transport in the North East and Southern geopolitical zones of the country.

‘‘It is also designed to link other standard gauge rail lines under construction through the provision of trans-shipment centres.

‘‘The funding of the railway is through loan to fund 85% project cost and the Federal Government contribution of 15% as counterpart funding,’’ he said.

According to the President, the Bonny deep sea port and the railway Industrial Park are to be constructed through direct investments from Chinese partners and international financing agencies.

He said these projects would serve transportation and supply chain network for domestic needs and export as well as support imports into the hinterland of the country through the new deep sea port in Bonny Island.

‘‘This improved port is designed to be a regional and international transport hub. In line with the global trends, the Railway Industrial Park will have the capability for processing exports of raw materials with value addition and also export of locally made goods.

‘‘In planning this project, prudent use of resources has been given priority, as by this endeavour, Nigeria will retrieve the old narrow gauge that has been lying in neglect for years and bring it to full functional state commensurate to a National railway service at a rational price,’’ he said.

The President, who requested the Minister of Transport, Rotimi Amaechi to cut the tape and unveil the plaque for the projects on his behalf, assured the nation of prudent use of resources in executing the projects.

Earlier in his address of welcome, Amaechi disclosed that the Bonny deep sea port and Railway Industrial Park, Port Harcourt are being developed through direct investment by a conglomerate led by Messrs CCECC Nigeria Limited with a total investment portfolio of US$700Million.

‘‘The Bonny deep sea port has a container terminal of 500,000 TEU (20 foot equivalent unit) per annum capacity and 100,000 DWT (deadweight tonnage) Berth
‘‘The Railway Industrial park, Port Harcourt would be supported by necessary infrastructure including power, water, waste disposal, ICT and gas distribution as well as transportation, logistics centres and ancillaries,’’ he said.

Amaechi affirmed that the Ministry was working in line with the President’s directives to implement the Nigeria Railway Modernization project and progressively expand the railway network.

‘‘In this regard, the rail line connection from Enugu to Awka – Onitsha and Abakaliki is undergoing necessary Feasibility Studies and preparation of conceptual design,’’ he said.