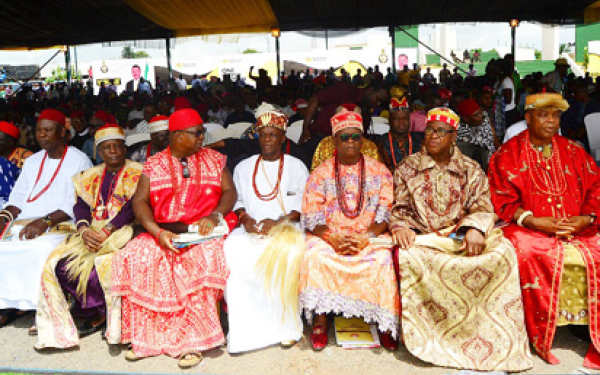 The delay by Southeast governors and the Inspector General of Police to arrive at the venue of the South-East security summit nearly marred the event.

The event which was slated for 9am was attended by the leadership of Ohanaeze Ndigbo, traditional rulers from the 5 states of the zone, religious leaders, captains of industry and other stakeholders from the zone.

They had all arrived on time with the venue, Base 2 event centre filled to capacity and the police band was on hand entertaining.

But as at 1pm the governors were nowhere to be seen as the VIPs patiently waited.

At this stage, most of the dignitaries ran out of patience and the Anglican Archbishop of Enugu, Dr Emmanuel Chukwuma and announced to the audience: “We are not here for music entertainment but for security issues. We have been here for hours waiting for these people and they are no where to be seen.

“This is how they toy with issues concerning Ndigbo. Why should they keep us waiting.?

As if that was the whistle the VIPs were waiting for, the President General of Ohanaeze Ndigbo, Nnia Nwodo stood up and left the venue and was followed by many of the traditional rulers.

Despite pleading of the chairman of the Enugu state traditional rulers council, Igwe Lawrence Agubuzu, the VIPS ignored him and left.

The governors and the IGP later arrived about an hour later.

Just as the Inspector General was giving his address, Nnia Nwodo reappeared. And the IGP paused and acknowledged his arrival and thanked him for returning.