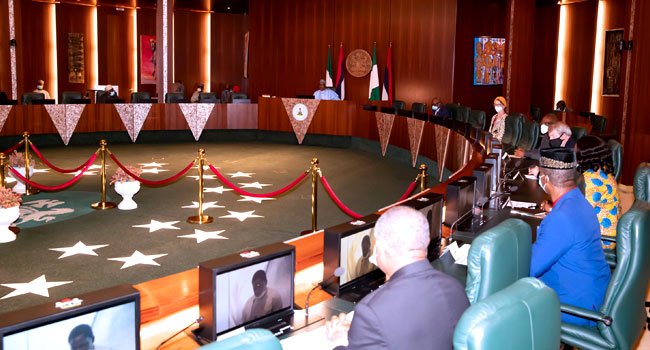 President Muhammadu Buhari has again condemned the attack on the office of the United Nations (UN) by Boko Haram terrorists in 2011.

Speaking on Monday in Abuja when he received a delegation led by the UN Resident Coordinator in Nigeria, Mr Edward Kallon, the President noted that the attack by the terrorists was regrettable.

He, however, said the reconstruction of the UN building by the government was in full appreciation of the work of the international organisation.

“Thank you for what you have been doing in the country, especially for women and children. I am glad you have put together a dedicated team to work with us,” the President was quoted as saying in a statement by his Senior Special Assistant on Media and Publicity, Garba Shehu.

He also welcomed commendations by the UN on efforts to restore security, strengthen institutions against corruption, improve health facilities, and rebuilding of the multilateral institution’s office.

President Buhari commended the various programmes of the UN in Nigeria, saying, “I am very impressed with the number of programmes you are carrying out, and I hope that our ministers will continue to cooperate with you.”

On the reconstruction of the UN building and Boko Haram bombing incident, he said, “I assure that beyond the renovation of your headquarters after that incident, we will continue to make your job feasible and comfortable.

“If you need anything in the course of your assignments, talk to the Minister of Foreign Affairs, Mr Geoffrey Onyeama.”

In his remarks, the UN Resident Coordinator praised the administration for the rebuilding and modernisation of the UN House in Nigeria, describing it as commendable support to multilateralism.

“The reopening of the UN House in October 2019, after eight years, was a day of celebration and remembrance.

“It was also an act of defiance in the face of terror and attack on our core values of peace, freedom, prosperity, tolerance and justice,” he was quoted as saying.

Kallon also commended President Buhari for his leadership and guidance in response to the COVID-19 pandemic, as well as the wisdom in establishing the Presidential Task Force (PTF) and adding his voice to the global call for a people’s vaccine for coronavirus.

He congratulated Nigeria on the successful eradication of polio virus and promised to partner with the country in building more primary healthcare centres capable of sustaining universal health coverage.

The UN envoy extolled the President and his administration for the establishment of the new Ministry of Humanitarian Affairs, Disaster Management and Social Development, as well as the continuous support in advancing gender issues, the girl-child, and rights of the child in general.

According to him, President Buhari should be praised for “legacy investments in the administration’s fight against corruption, electoral reforms, and census.”

Kallon also commended the President’s “resolve to reform and return discipline in the public service, as well as the success in fighting corruption, including convictions and recovery of assets.”