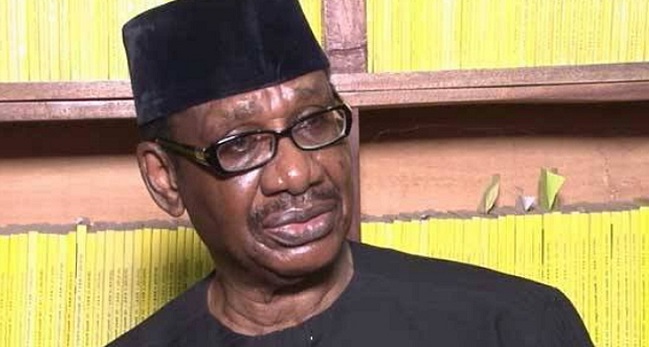 Sagay, a professor of law, made the call on Wednesday, insisting that the legal advice the President got was mischievous.

According to him, Giadom had no right to summon the meeting because a deputy national secretary is not in line to succeed the national chairman, adding that the ex-parte order Giadom is relying on to claim acting chairmanship had since lapsed.

He told The Nation: “I’m stunned by this turn of events. How can a deputy national secretary have the ambition to be the chairman of a party when you have deputy chairmen and vice-chairmen?

“That is why it is absurd. It does not make sense. His position makes it impossible for him to be the acting national chairman.

“Second, he is relying on an ex-parte order in which he alone was present and the court gave him an interim order in March. These orders last for 14 days.

“He turns up in June to say it has been extended – something that is dead, that does not exist and has lapsed. That is the second absurdity. If he had applied for a fresh order, that would have been different.

“When I heard of the developments, I was stunned into silence. I’m so stunned as to how such a person could be given legitimacy at the highest level.

“The legal advice the President got is mischievous in the extreme because there is no court order to extend since it does not exist. It died two weeks after it was made. The line of succession of the chairman cannot come from the Secretary.

“So the whole thing is an absurdity. I always hear of the theatre of the absurd, but this is one of the worst I’ve ever heard of.”

Speaking further, Sagay said the President should reconsider his position and not attend or participate in the NEC meeting called by Giadom.

“That’s my view. And as someone pointed out, seven days’ notice is needed for such a meeting. Only three days have been given.

“So I would advise the President to step back from this matter and not participate in it”, Sagay said.