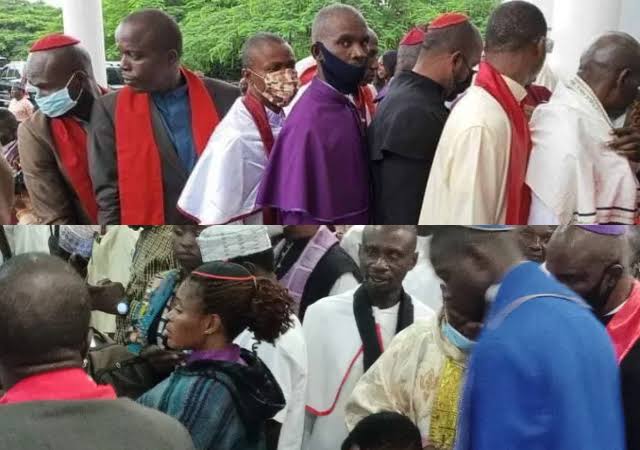 Based on my master’s degree in Christian liturgical studies, the photos of the Clergy

represent clerical vestments and habits in a public function. Therefore, my claim

and analysis emanate from the two photos I received.

wearing the Chasuble is presumed to be a bishop base on the purple Cassock.

However, bishops don’t dress like this for political functions. Also, the person with

the black Cossock is alleged to be a bishop. However, bishops don’t wear a black

Cassock to such functions.

Secondly, Priests don’t also wear a stole to such a political function. And how can

Does a Priest wear a stole on a suit without a priestly collar? Unfortunately for them, the

Thirdly, look closely at the ‘white Cassock with cape’. The White Cape with the red

the ribbon on the edge is put on top of a white Jalabiya. Most importantly, do you think a

mainline or a Pentecostal pastor will wear a Cassock without ironing, especially to

Fourthly, both mainline and Pentecostal pastors have and respect hierarchy and

understand protocol; therefore, they cannot queue in public gatherings without

Generally, everything about the photo is disturbing, insulting, and undermines

dressed ‘pastors’ to the unveiling of a “COMPETENT” vice presidential running

The Association of Nigeria (CAN) is not a law enforcement organization. Its

political responsibility is to speak truth to power, create awareness and

mobilize its members to embrace or reject the APC Muslim-Muslim ticket.

However, members of CAN are free to express their political agency.

division in CAN. It shows that CAN is a force to reckon with in 2023

active political participation against the Muslim-Muslim ticket, as

emphasizes religion? Is this a double standard or an acknowledgment that

religion is older than the “democratic system” in Nigeria and, therefore,

cannot be ignored? Hence, political parties must understand and appreciate

the relationship between religion and politics for human flourishing and

University of the Western Cape