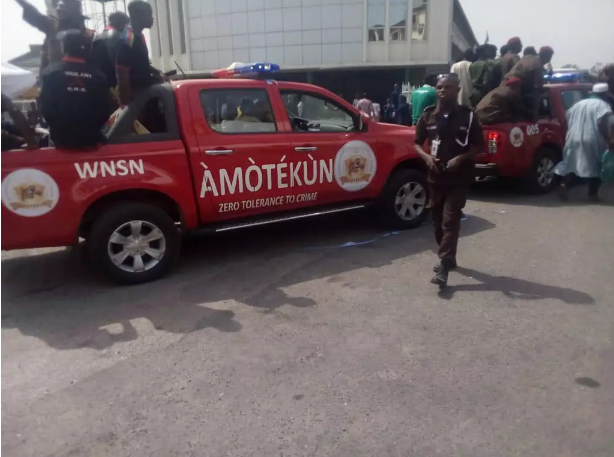 Catholic bishops from the six states in the South West geopolitical zone, Nigeria, on Tuesday, threw their support behind the recently launched Western Nigeria Security Network, also known as Amotekun.

They made their position known at a conference in Ibadan, the Oyo state capital where they endorsed the new security outfit.

DAILY POST reports that Governors of the region had last month launched the new security outfit, with a view to addressing security challenges facing the people of the region.

While describing the security situation in the country as worsening, the Catholic bishops declared that human life seemed to have lost value with the state of insecurity in Nigeria.

Archbishop of Ibadan diocese, Most Rev. Gabriel Abegunrin who addressed journalists after the conference, dismissed the claim that Amotekun was targeted at the herdsmen.

He stated that Amotekun is to take care of people who live in the Southwest, including the herdsmen, Hausa, Ibo, yoruba and every other nationality.

While describing the establishment of Amotekun as the right response to the cries of the people of Southwest, the clerics commended the governors of the Southwest for quickly responding to challenges of insecurity in the region.

Abegunrin said, “It is not true that it is targeted against the Fulani herdsmen. If you listen to what they said and what people have been saying, that is not true at all.

“Amotekun is to take care of the people of South West region, we are not saying of Yoruba or Hausa or Fulani. Anybody leaving in the Southwest is covered. I think that is their duty. They are not excluding anybody at all. Look at the Fulani or Hausa we are talking about, their Sabo communities will be protected. But one thing is that if the Fulani people know that they have plans to do havoc in Yoruba land, they must be ready to face the music. But the Amotekun is not necessarily against the herdsmen at all”.

While calling for proactive measures to arrest the ugly situation, Abegunrin condemned the approach by the federal government which he said was far from the expectations of Nigerians.

“And when the government comments, either the president himself, or his media aides, you will find them defending. And watering it down and attenuating the facts, And that is human life, and that is not really good. They are full of defence instead of facing the truth and say that this is bad. And this idea of , you are on top of the matter dosen’t work with us. But we want to see the action, that is what we want to see”.

Speaking on the call on President Muhammadu Buhari to resign by some group of people, the Catholic bishop described the call as normal.

“Well, it is normal that if a government is not performing, and its not ready to change, such a government should leave to give room for those who can do the job, because it’s not a family kind of inheritance. We cannot treat the whole country as our backyard, or as a personal thing.