Abuja-Lokoja expressway at 95% completion, to be delivered soon – Minister 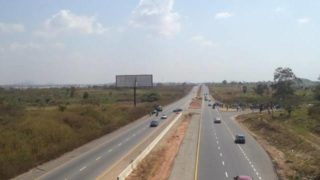 The Minister of State for Works and Housing, Mr Abubakar Aliyu, says the Abuja-Abaji-Lokoja expressway will soon be concluded and delivered for use.

Aliyu, who said this during the inspection of the dualisation of Abuja-Abaji-Lokoja road section 1 on Saturday in Abuja, noted that the construction had reached over 95 per cent completion.

According to Aliyu, President Muhammadu Buhari at the inception of his administration in 2015, had mandated that all inherited projects be completed and delivered before new ones are embarked upon.

He said the Abuja-Lokoja road was awarded by the previous administration in 2006 at the cost of N11.2billion, but was not completed.

Aliyu explained that President Buhari, mandated that all projects that were on ground must be finished since government was a continuum.

“This project for which we are here today is an 84km road contract, 42km on the two carriage way each.

”It was reviewed in 2018 and the cost increased based on the time value of money to N29billion, so work the has been going on and has reached over 95 per cent completion.

”As you are all aware the programme for 2020 budget is to sort out the projects that has reached 80 to 90 per cent completion, push them and deliver them. So, this is part of the ones that has reached this percentage.

”We are here to agree on certain grey areas that are making this road not to be completed at the time stipulated, because we expected them to have completed it in May this year, but we are now in June.

”We are here with the contractors, they have complained on certain things, the honourable minister my senior colleague, mandated that I come here with other directors and interface and see first-hand, what is going on with the project,” he said.

Speaking on his assessment of the road, Aliyu gave a pass mark on the work done so far and expressed optimism that the project would be delivered as soon as all the grey areas on the project were resolved.

Also speaking at the inspection site, Mr Nasiru Dantata, Executive Director, Dantata and Sawoe Construction Company, handlers of the project, stated that the challenge that had hindered the completion of the project was the necessary upgrade needed for the perfect delivery of the road.

According to him, such necessary input is the inclusion of a service lane in the pick park within the Gwagwalada metropolis, that will cater for the motorists that were going in and out of the park.

”Our company and the ministry have identified that the area needs a service lane to cater for motorists that are going in and out of the park.

“Therefore, the necessary approvals that are needed to get that done is what delayed the work.

”It is going to be an easy work once it is approved. So, this area is the only missing link, only one stretch in Gwagwalada that is remaining. Once we do that we have small things to tidy up and handover the job,” he explained.

The News Agency of Nigeria (NAN) reports that the inspection of the road commenced from Zuba where the minister inspected some outstanding works on the project, through to Kuje interchange at Gwagwalada, Giri interchange to Airport Junction.

The Abuja-Lokoja expressway is one of the major Federal Government highway infrastructure projects being executed by the current administration, to facilitate socio-economic development and prosperity of the citizenry.