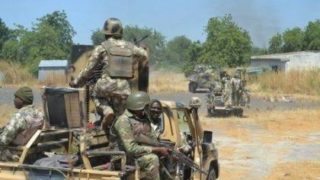 The Coordinator, Defence Media Operations, Maj.-Gen. John Enenche, disclosed this in a statement in Abuja on Saturday.

Enenche said that the operation was in continuation of intensive clearance operations under Operation Accord aimed at curtailing the activities of bandits and other criminals in the North West and North Central region.

He said that the daring raid was sequel to technical and human intelligence on the activities of a notorious kidnap kingpin at Pialat Hotel in Kwa.

According to him, troops overwhelmed the suspects who opened fire on them, with superior fire power, neutralising 3 of them while others escaped with gun shot wounds.

He further disclosed that the same troops in collaboration with local vigilante rescued one Salisu Abdullahi, a herder, who went missing while grazing around Bakin Rafi at Gidan Ado general area in Riyom Local Government Area.

According to him, troops arrested a suspected kidnapper, one Alhaji Idris around Hawan-Kibo general area also in Riyom Local Government Area.

He added that four other suspected kidnappers were apprehended in connection with the kidnap of one Mr Abdullahi Abdullahi at Kwahas-Lahir area in Mangu Local Government Area of the state.

According to him, all the suspects have been handed over to relevant civil authorities for further investigation and prosecution.

“This was aimed at cushioning the economic hardship caused by the COVID-19 pandemic.

“While the general public is requested to continue to provide timely and credible information to the Armed Forces of Nigeria,” he said.